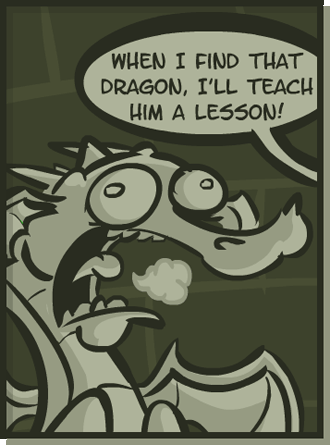 I swear this never happened before.
"For years have my people been oppressed, silenced and even slain for being who we are! Still today we're treated like monsters, and hunted down savagely because of such narrow-mindedness!
...And I'm pretty sure a few of these movie rentals are overdue."
— Winston the Dragon

is a webcomic created by Leo Modesto and Alex Medina (written by both, drawn by the former) and hosted as part of their website, DOUBLEPUMA.com

. The comic follows the adventures of a boy and his pet rock who set out to live grand adventures in a whimsical fantasy land. They meet all sorts of people and creatures along the way, from TV-loving dragons

The comic's main gimmicks are a quasi-retro aesthetic that mimics handheld game systems of old (though it's not a video game comic per se) and its use of Flash content to, among other things, allow the reader to name the main character. The comic has occasional animated and full color strips as well - complete with 8-bit sound effects.

Being rather new (the website launched on February 1st), there are few characters, such as:

Currently, the strip updates twice a week, on Mondays and Wednesdays.