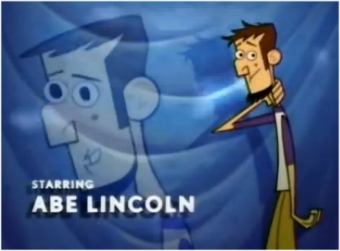 Voiced by: Will Forte

The clone of Abe Lincoln. A gangly, indecisive teenager who pines for Cleo while being entirely oblivious to the feelings of his best friend Joan. He's Weak-Willed, in stark contrast to his namesake. 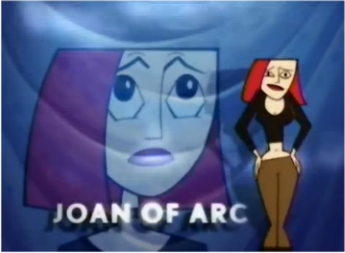 Abe's best friend who's in love with him, but to her frustration he fails to notice. The clone of Joan of Arc, like Gandhi she cracked under the pressure, becoming a goth as a result. 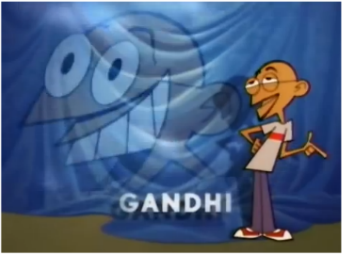 A high-five loving party animal who broke under the pressure of living up to the original Gandhi's legacy. He's constantly trying to be popular despite the fact that no one besides Abe and Marie Curie really likes him. 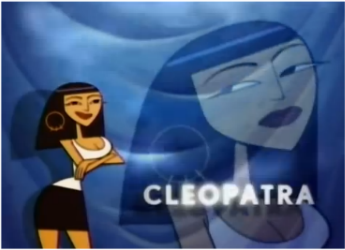 The clone of Cleopatra, a selfish, spoiled, vapid Alpha Bitch who's the object of Abe's affection. 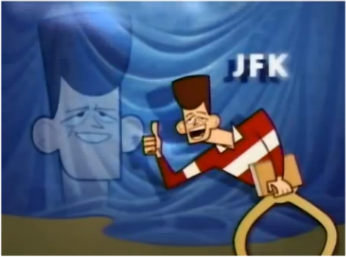 "I'm a Kennedy - I'm not accustomed to tragedy!"
Voiced by: Chris Miller

The clone of John F. Kennedy. A macho jock who believes his namesake was a "Macho womanizing stud who conquered the moon!" and strives to live up to that, as well as be incredibly masculine due to having gay foster dads. 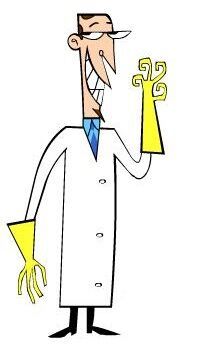 "Unacceptable? Did you see the pool? They FLIPPED the bitch!"
Voiced by: Phil Lord
"Maybe we could have dinner! Perhaps the Olive Garden. It's like eating a private dinner in the kitchen of a delightful Italian stereotype!"

The principal of Clone High who's secretly plotting to use the clones for a clone themed amusement park called Cloney Island. Is constantly up to some sort of scheme. 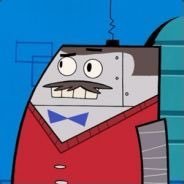 "Good title. It draws the reader in without giving too much away. Wesley."
Voiced by: Chris Miller

A robotic butler based on Mr. Belvedere. Principal Scudworth's sidekick, best friend and voice of reason. Has a habit of calling everyone "Wesley". 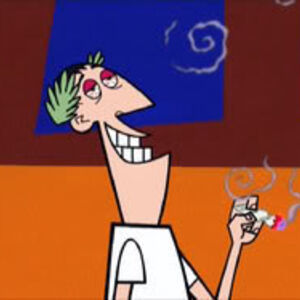 "I've always enjoyed ingesting raisins, but I never thought about smoking them."
Voiced by: Neil Flynn

The clone of Gaius Julius Caesar, portrayed as an eloquent-speaking dudebro, and the best friend of JFK. 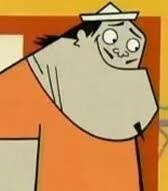 The large-framed and extremely stupid clone of Genghis Khan. He usually speaks in short, loud sentences. 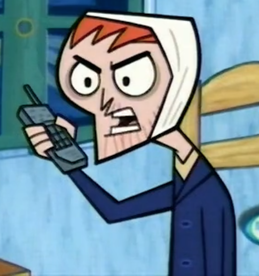 "My only comfort is that no one knows how... lonely I truly am."
Voiced by: Andy Dick

The depressed, suicidal clone of Vincent Van Gogh. The "emo" kid of the school. 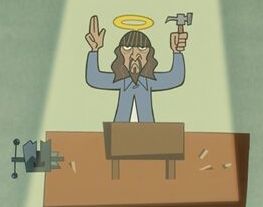 "God has a plan for all of us. A painful, painful plan."
Voiced by: Jeff Garcia

The Latino clone of Jesus Christ. His biggest role is perhaps in episode 2 where he helps Joan. Jesús is an all-around Nice Guy who tells others to relax and not worry too much about problems because God has a plan for everyone. 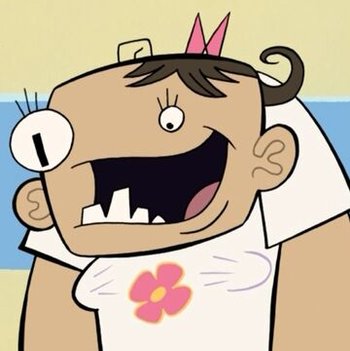 The clone of Marie Curie who's been hideously deformed due to over-exposure to radiation. 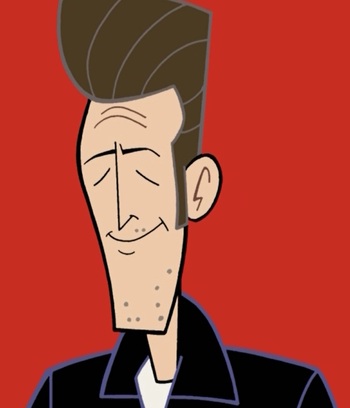 "Life is so short. I mean, there's no fountain of youth, Jacky boy. You gotta live every day like it was your last."
Voiced by: Luke Perry

A one-time character introduced and killed off in "Litter Kills: Litterally" (his introduction is so abrupt, in fact, that his death doesn't even get a spoiler tag). Ponce is JFK's best friend who everyone looks up to. He enjoys littering, despite his foster dad being the school's janitor, but littering ultimately leads to his own death when he drowns in his own blood, head trapped in a plastic bag. 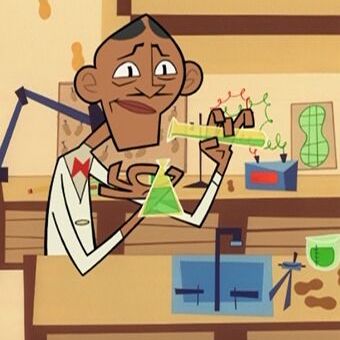 "Hello, cohort. It is I, George Washington Carver..."
Voiced by: Donald Faison

The clone of George Washington Carver, who is a burgeoning Mad Scientist obsessed with experimenting on peanuts. He is always accompanied by a mutant, talking peanut, Peany, which he created. 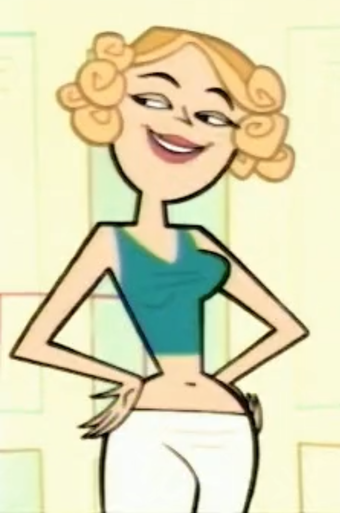 The clone of Catherine the Great, she is a popular student who is often seen with Caesar, Cleo, and JFK. 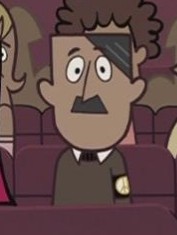 Voiced by: N/A
The clone of Adolf Hitler, Adolf only appears for a single background shot in "Tears Of A Clone", yet for obvious reasons, has had a lasting impact on the fandom. 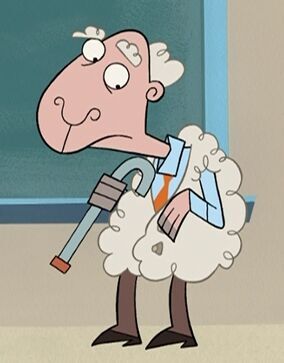 "School's always awkward. I just want you to know that I can relate."
Voiced by: Andy Dick

A history teacher and the main cast's homeroom teacher. The world’s first (mostly) human clone, with a little bit of sheep DNA spliced in. 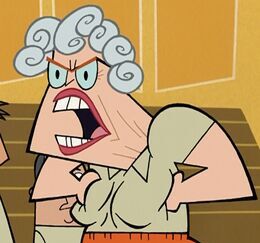 "It's time for the Presidential Fitness Test! Where we make you even more insecure about your bodies, by judging you while you perform arbitrary physical tasks!"
Voiced by: Murray Miller

The gym teacher at Clone High, and a genetic clone of American diplomat, humanitarian and first lady Eleanor Roosevelt. The only cloned historical figure to serve as a staff member. 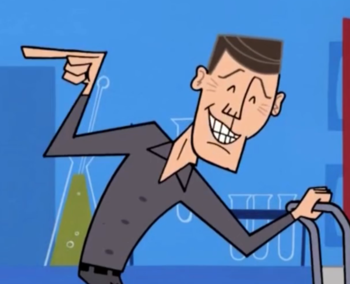 "You guys do me a favor: have yourselves a great day."
Voiced by: Neil Flynn

Poncé's foster dad, who works as the janitor at Clone High.

Joan of Arc's "foster grandpa". Toots is a blind man with good intentions, he can sometimes provide helpful insights on Joan's problems, but most of the time just says things irrelevant to the situation at hand as he stumbles around like Mr. Magoo.

Cleo's Drunk Foster Mom is, well, Cleo's drunk foster mom. Never without a drink in her hand, she's either verbally or physically abusive to Cleo (not that it seems to bother her) and lets Joan and Toots move in with them because she's dating Toots.

JFK's foster parents, Wally and Carl. Wally is a slight Camp Gay and Carl is a blatant Straight Gay. They're known for being two of the more supportive foster parents seen on the show. Well, Wally is, at least.

A famous comedian with ADD who tries to raise awareness about the disorder at Clone High. Unfortunately, his ADD makes it very hard to stay on topic.

A singer-songwriter from the band O-Town who hosts the Spring Break Dance Academy TV show.

The Narrator
Voiced by: Tommy Walter

The narrator of the show. In theory, his job is to recap the previous episode and tease the following episode, but he mainly spends his time ranting about his personal life and insulting the audience for not keeping up with the show.

Secret Board of Shadowy Figures 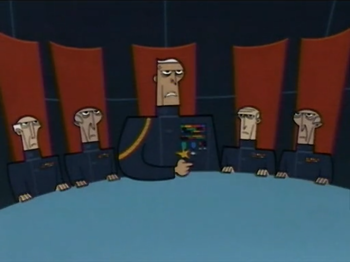 "Dr. Scudworth, the Secret Board of Shadowy Figures has recently begun to suspect that you are completely insane."
Voiced by: Bill Lawrence (Leader)

The shadowy heads of the government cloning project and Scudworth’s superiors, who don’t trust him, due to their (correct) suspicion he is completely insane. 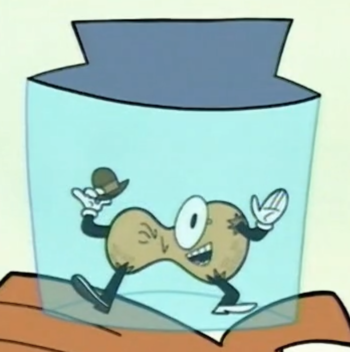 "I'd shake your hand, but you know, peanut arms!"

A sentient, talking peanut who was genetically engineered by George Washington Carver.

A rock star who visits Clone High as part of their anti-drug program. He has a secret identity as The Pusher, a drug dealer who sells raisins to kids.

A trucker who takes Gandhi under his wing as part of Gandhi’s elaborate scheme to get out of taking the PXJTs. He’s later revealed to be the ghost of the deceased creator of the PXJTs, who secretly taught Gandhi how to do the test.