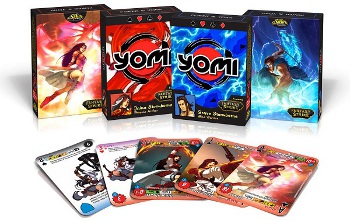 Yomi is a card game that simulates a fighting game. It is a card game designed by David Sirlin, a known champion fighting game tournament player and tournament organizer, and is part of his Fantasy Strike universe which features several games with the same characters and settings. It tests your ability to predict how your opponents will act (Yomi is the Japanese word for “reading,” as in reading the mind of your opponent) and your ability to judge the relative value of cards from one situation to the next. Also, it lets you do fun Combos and be a panda. There are 10 characters to choose from, each with their own deck, abilities, and style. Each deck also doubles as a regular deck of playing cards.

Its setting and characters are heavily inspired by Street Fighter, and feature fantastical martial artists participating in a tournament for the sake of competition and bringing conflicted cultures together.

Players perform combat by taking their turns simultaneously and each placing one card face-down, then revealing. There are four combat options in cards: attack, throw, block and dodge. The winner of the combat is determined in a Tactical Rock–Paper–Scissors:

If both players choose attack or throw, the faster of the two wins. If both choose defense, nothing happens, although blocks are returned to their user's hand on such a neutral result while dodges are not.

If one wins with an attack or a throw, there is the option to combo. All attacks and throws have different attributes that show their ability to be used in a combo. Winning with a dodge allows the winner to automatically hit with one attack or throw. Winning with a block allows the winner to draw an additional card, as well as return the block to their hand. The loser of the combat can use a face-down Joker to escape further damage or try to bluff by using a face-down normal card.

Despite its seemingly simple Rock-Paper-Scissors style, there is a lot of thought and possibilities behind each possible choice. Do I want to make great combo strings? Knock the opponent down with just one throw? Increase my hand size to improve the power and amount of my options? What is the opponent going to choose? Also, every character has their own special ability that affects the play, and every deck is different, forcing you to adapt according to your own and your opponent's deck.

An electric adaptation of Yomi is available online

This card game provides examples of the following tropes: