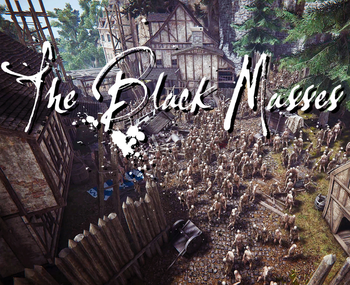 The Black Masses is an upcoming game from Brilliant Game Studios, the developer behind Ultimate Epic Battle Simulator. Initially slated for release in the summer of 2019 on PC through Steam, but got delayed. Instead the game got a free demo and later, on the 12th of March 2020, entered early access. At the time of this writing (August 2021) it is still in early access.
Advertisement:

Described by the creators as first-person fantasy co-op open world RPG, it is set during the equivalent to medieval times, on an island 16 x 16 kilometers in size. It used to have hundreds of thousands of people living there at its peak, but practically all of them have now been reduced to mindless shamblers as a result of a mass instance of Demonic Possession.

Some videos of the current game are here

Tropes seen in the preview materials for The Black Masses: