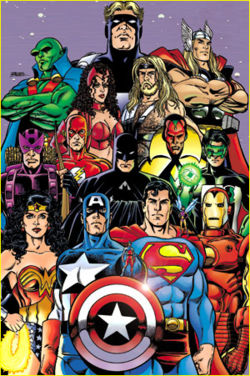 Always we will fight as one.
Advertisement:

JLA/Avengers (or Avengers/JLA — both titles were used) is a four-part comic book miniseries co-produced by the DC Comics and Marvel Comics companies (each published two issues) in 2003-2004. It features a Crisis Crossover between the companies' top superhero teams, The Avengers and the Justice League of America. The crossover has an interesting story both within the comics and without.

Originally, the crossover — which would have pitted the teams against their respective enemies Kang the Conqueror and the Lord of Time — was meant to come out in the early 1980s; noted artist George Pérez, who had worked on both team's titles, was set to draw it. But some behind-the-scenes conflict (allegedly, Marvel's then Editor-in-Chief, Jim Shooter, pointed out some story errors — such as the hero Quicksilver being as fast as The Flash — and asked for a rewrite, which was not well-received by the DC people) led to the project's cancellation, despite Perez having already drawn several pages. This caused resentments that prevented the companies from doing crossovers again for several years, and left many comics fans disappointed.

By the early 2000s, however, relationships between the companies — both under new administrations — were cordial again, and the project was revived, with Perez once again set to draw it, and a new story done by writer Kurt Busiek (both of whom were in charge of the Avengers' comics at the time). The series was a financial and critical success, and is even (apparently) considered canonical by both companies (the "Krona Egg" artifact has appeared in some issues of DC's Justice League and Trinity (2008) series, while the events of the crossover are mentioned in the Official Handbook of the Marvel Universe).

The story involves Krona, a DC villain turned cosmic, obsessed with discovering how universes are born, and tearing several of them apart in the process. To save his universe, The Grandmaster, a cosmic being from the Marvel Universe, offered to give Krona the knowledge he wanted…if he beat Grandmaster in a gamenote the reveal was that Galactus, an inhabitant of the Grandmaster's universe, had survived the previous Big Bang and thus possessed the knowledge Krona coveted. Krona accepted. The "game" was to force the two superhero teams to compete against each other (without telling them the real reason) over several artifacts scattered over their worlds — notably, each being backed the team of the opposing universe. This turned out to be a plan of the Grandmaster's to imprison Krona; it also resulted in a change of reality, creating a world where both teams had always co-existed. However, they discover the truth, and, finding out that Krona is about to free himself, decide to join forces to beat him once and for all. Alterations of time result in virtually every hero who had ever been an Avenger or a Leaguer showing up to help (but so did their enemies, under Krona's control). In the end, Krona is defeated and reality is restored to normal on both worlds.

It should be noted that this crossover seems to supersede the similar Marvel Versus DC one that had taken places in the 1990s, despite that one having also (apparently) been canonical. This was explained as a dimensional variation of Timey-Wimey Ball by Access.