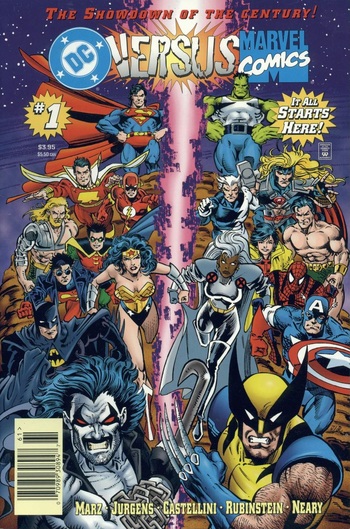 Marvel Versus DC (or DC Versus Marvel) was a 1996 four-issue miniseries crossover event, written by Ron Marz and Peter David, and illustrated by Dan Jurgens and Claudio Castellini, that pitted characters from DC Comics against those from Marvel Comics.
Advertisement:

You want more than that? Okay, here goes: both the DCU and the Marvel Universe exist within a pair of timeless cosmic entities, called "Brothers", who were created together but separated from each other after their first battle, which culminated with the destruction and recreation of the universe they inhabited. Because of this, they spent eons unconscious, and unaware of each other's existence, but a series of crossovers caused them to slowly gain awareness of each other again. Then and there, they each decided only one of them should encompass the whole of reality; but knowing that going head-to-head would just destroy everything again without a conclusion, they decided to set up a contest: each of the Brothers would choose eleven heroes, or "Champions", to represent them in a series of battles, and once the final score is tallied, the losing universe would cease to exist. Of these eleven fights, six served as warm-ups (winner in bold):

The "main event" of the crossover, so to speak, were the five fights involving some of the top characters of both publishers at the time, whose outcomes were to be decided by the readers. With them deliberately starting after all other fights left the contest at a stalemate, the fate of two universes was literally in the readers' hands. The results were as follows:

With the final score 6-5 to Marvel, the DC Universe would be wiped out, but the Spectre and the Living Tribunal opted for a different solution: forcing the Brothers to fuse together, creating the Amalgam Universe. They were forced to step in like this because, in the cosmic order of things, both universes were supposed to be kept inextricably separate, and the crossovers started to change this.

This is where Access comes in: once a drifter named Axel Asher, he soon learned he carried within himself a shard of the Brothers' essence, and received his powers from his predecessor, a hobo who tended to an oversized cardboard box in an alley in New York City, which in fact hid a gateway between the universes, and became ground zero for the crossover when the gate became too powerful to contain. As a last-ditch attempt, Access was forced to share his power with Batman and Captain America, whose duel had just taken place nearby, so when the universes were combined, Access made sure to take these shards back from both heroes' amalgamated forms to empower the Spectre and the Living Tribunal, helping them keep both universes' integrity while splitting Amalgam back into DC and Marvel. Unfortunately, this only made the Brothers go "screw this" and straight-up fight each other. Knowing this would be the irrevocable end, Batman and Cap convince Access to let them try and stop the Brothers - which they do once they see their respective heroes, and see each of their universe has their own worth. So they stop trying to destroy each other, go their separate ways and all is well, right?

Well... Not quite. The series got a sequel in 1997, titled DC/Marvel: All Access (also penned by Marz, but this time illustrated by Jackson Guice and Josef Rubinstein, the latter of which worked in the original series as an inker), in which characters are crossing universes randomly and, as this must mean something is trying to force the universes back together, Access must step in again to keep things right in the Multiverse. But the root of the problem might be closer than he thinks... Likely in a certain building in Bleecker Street...

Finally, later in that same year, Unlimited Access (written by Karl Kesel and drawn by Pat Olliffe) closed the Marvel Versus DC trilogy. While still trying to get the hang of his powers, Access accidentally learns he can travel not only through space, but also time, at the same time an unknown force is bringing villains associated with Darkseid to take over the Marvel Universe. Access tumbles through different timelines trying to get a hang of his powers and to get enough heroes to fight off the threat of Apokolips, even if they have to be as far apart in time as the original X-Men and the Young Justice.

Because of the scope, this was one of the highest-profile crossovers between Marvel and DC, and also one of the last few until JLA/Avengers, which is, so far, the companies' last official collaboration.

Tropes found in Marvel Versus DC and its sequels include: