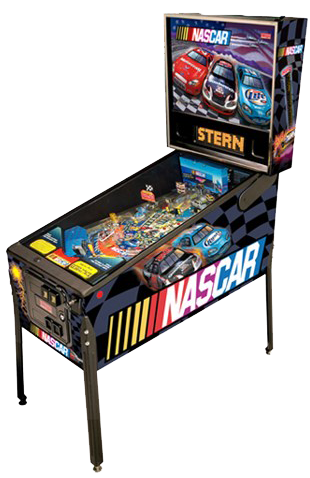 NASCAR is an arcade pinball game designed by Pat Lawlor and illustrated by John Youssi. It was released in 2005 by Stern Pinball.

As one would expect, this table is based on NASCAR, the popular American autoracing sport. With accompanying commentary by NBC's Allen Bestwick, launch balls onto the magnetically-charged oval speedway around the playfield and scream into the action, then enter the Hauler truck and rack up the Miles and make the Speed Shots on the Road Course. Raise the Test Car to access the underground Garage, where you can whoop it up with the Super Fan, indulge in Happy Hour, and join the Infield Party, but watch out for the Bump 'N Run. Spell RACE to lock pinballs for multiball, collect the various Jackpot bonuses, then freeze the Super Jackpot and add more balls for bigger points. If you can make it through the rigors of the oval and take a Victory Lap, celebrate with a Super Party — and then take on the Champion Challenge.

Compared to other pinball tables, NASCAR is a relatively casual game, one that's not too difficult to play but couples speed and flow with a fair amount of depth and variety. Pinball enthusiasts view its traditional fan-shaped design as a change of pace for Pat Lawlor, one that grows on you after several plays.

NASCAR was released exclusively in North America; for the rest of the world, it was rethemed and released as Grand Prix, with an Indy Car racing motif. The game was later redecorated and re-released in 2007 as Dale Jr., a chrome-trimmed red-colored limited version commemorating famed racer Dale Earnhardt, Jr.

Allen Bestwick: "That was perfect!"