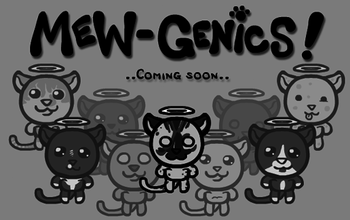 "I think most would describe Mew-Genics as a cross between The Sims and Pokémon with a sprinkling of Animal Crossing and a dash of Tamagotchi , but at its core the game really isn't like anything we've seen before."
— Edmund McMillen on Mew-Genics

Mew-Genics is an upcoming project of Team Meat (Edmund McMillen and Tommy Refenes). Most gameplay details came from a post describing a single description of a "typical" gameplay session

. It has been variously described as "a game about cats. Sorta," and "a Crazy Cat Lady simulator," and involves raising and breeding cats for fun and profit.

that the game is back in development.