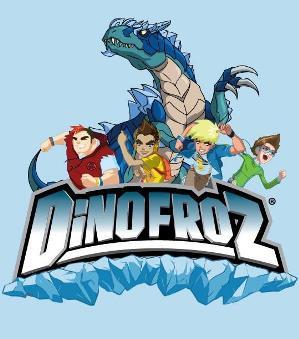 The eponymous Dinofroz crew. note Pictured left to right: Bob, John, Tom, and Eric.
"Go to the past to win in the future!"
— Tom's Catchphrase in Season 1
Advertisement:

Dinofroz is an animated Italian series created by Orlando Corradi and Giochi Preziosi, and produced by Mondo TV.

After twelve-year-old Tom and his friends John, Bob, and Eric come across a strange board game known as Dinofroz, they decide to play it together. However, when they activate the game, they suddenly find themselves transported millions of years in the past where dinosaurs and dragons still roamed the world. They soon discover that they have the power to turn into massive dinosaur-like monsters called Dinofroz, and that they were chosen to stop an evil dragon lord named Neceron from taking over the world. Should they fail, then the present will be affected as well, and Neceron shall rule over all.

Season 2 takes place some months after the first season while Tom and his friends are on summer break. After an alleged blue dragon is spotted flying around in the city, the gang decides to spend their vacation going on an expedition looking into the matter. During their journey, they inadvertently travel through a time portal and find themselves back in the prehistoric era. Upon finding out that a new dragon lord named Drakemon has surfaced, Tom and his gang find themselves battling the dragons once again to save humanity.