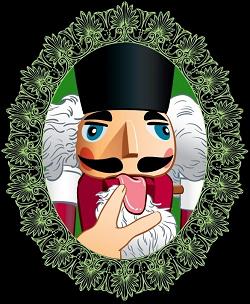 Merry Slutmas!
In the simplest terms: The Slutcracker is a burlesque re-imagining of Nutcracker ballet.
Advertisement:

The Slutcracker is the brainchild of Boston-based burlesque star Vanessa White (aka Sugar Dish) who also choreographs and directs the production. Everything is, as one might imagine, updated to be Hotter and Sexier. Some names are tweaked and the relationships between characters are changed, but the scenes and basic narrative is the same. The production is a growing holiday season hit in Boston and features both ballet and burlesque. The cast is mostly made up of professional dancers but also features character actors and hula-hoopers.

The Slutcracker features some beautiful choreography and naturally mixes in a lot of sex comedy. The cast usually has performers who are also members of other burlesque troupes and, as such, have burlesque stage names.There is also a companion book called Twas the Night Before Slutcracker.

Tropes that can be found in The Slutcracker include: