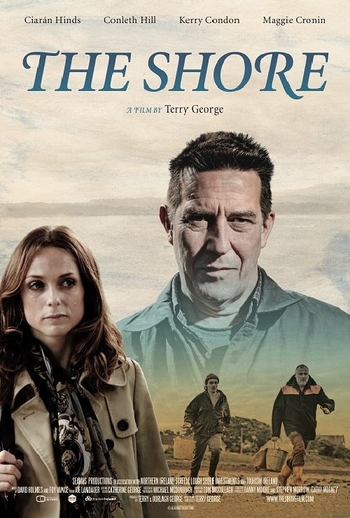 The Shore is a 2012 film from Northern Ireland directed by Terry George.

The setting is a small coastal town. Paddy (Conleth Hill) is a minimally employed villager who lost an arm many years before, after he got shot during The Troubles. He draws unemployment insurance while earning a little side cash harvesting mussels from the beach.

Arriving in Northern Ireland after 25 years is Jim (Ciarán Hinds), along with his daughter, Pat (Kerry Condon). Back during the Troubles, things got so bad that Jim lit out for America, leaving behind his devoted girlfriend Mary. Jim had thought that Mary would come with him, but after he had been in America for a little while he met the woman who became Pat's mother. Mary, left behind in Northern Ireland, eventually got married—to Paddy.