Useful Notes / The Commonwealth of Nations 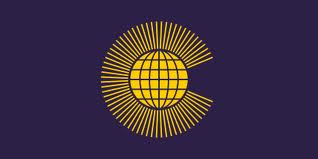 The flag of the Commonwealth.note A revised version was released in 2013

They have their own version of the Olympic Games, called the Commonwealth Games, held every World Cup year. Apart from the usual Olympic sports, there are also some more "British" sports such as lawn bowls and netball (cricket has only been played once, at the 1998 games), and Paralympic events are integrated into the Games rather than being a separate event. Their version of the Olympic Torch (and its accompanying relay) is the Queen's Baton, which contains a message from the Queen, whose contents are only disclosed during the opening ceremony. The latest edition was held on the Gold Coast, Queensland, Australia in 2018; Glasgow, Scotland hosted the 2014 Games, while Birmingham, England will host the 2022 Games.

Highlighting the fact that membership is possible for nations that are not former British colonies, in 1956 British Prime Minster Anthony Eden extended an informal invitation for France to join the Commonwealth (with the potential for a complete merger of France and the UK), which French PM Guy Mollet briefly but seriously considered. Though the Normandy region of France was once under English rule. Nor was this even the first time the UK and France considered merging into a single nation.