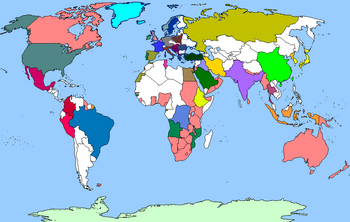 The timeline starts diverging when Wolfgang Kapp decides to hold a rousing speech at the Reichstag instead of trying to stage a coup.

Without this inherent weakness, the Weimar Republic struggles on. Eventually, Paul von Lettow-Vorbeck takes power in Germany while Hitler starts a civil war in Austria (which is promptly annexed and pacified by Germany). Without a powerful belligerent country in Central Europa, Stalin's Soviet Union focuses on Asia, taking on Japan.

Continuing through the decades, this alternate timeline sees the gradual unification of Europe, the continuing existence of the League of Nations, and the violent (and nuclear) breakup of the Soviet Union. The timeline ends in the 2019s in a somewhat brighter world.

The original thread can be read here

. The condensed version is here