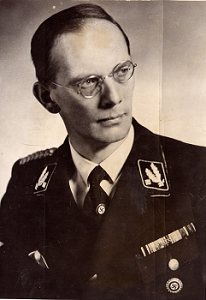 Führer Fred.
"The finest trick of the devil is to persuade you that he does not exist."
— Charles Baudelaire, Le spleen de Paris, XXIX (1862), the prefacing quote
Advertisement:

) is a counterfactual history hosted on AlternateHistory.com, written by the user "Tom Colton".

, who in Real Life was a a scholar in veterinary science who led one of the paramilitary Freikorps in the early days of the Weimar Republic, joined the Nazi Party under Adolf Hitler and involved himself in the Munich Beer Hall Putsch in November 1923.

However, in this timeline, a meddling American named Paul Driscoll shoots Hitler in the middle of the Beer Hall Putsch, injuring him just grievously enough for him to dictate Mein Kampf (called Der Deutsche Kampf in-universe) to Weber before dying. Weber takes over the Nazi Party after Hitler's death, and eventually the Nazi Party takes over all of Germany - but some things are just noticeably different, and the divergences become full-blown once World War II breaks out...

The primary inspiration for this timeline were the plethora of threads discussing slightly saner wartime policies for Nazi Germany to pursue during World War Two, all mostly coming to the conclusion that any adjustment of German policy in such a direction would require someone besides Hitler and his cronies, with their lunatic ambitions for Europe and the World, to be in charge of Germany.

The main question thus posited by this series is: What if a slightly more pragmatic Führer had led Nazi Germany? Not everyone, especially not the populace of Eastern Europe, will like the answer...

The story was concluded in late 2018 with an announcement that there would be no further installments, followed by a wrap-up of the various trajectories