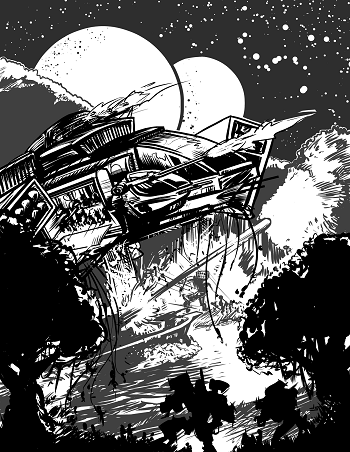 First, it is designed to be exceptionally mod-able and expandable: the core mechanic (a dice pool system) is very flexible, and the system is designed as such to facilitate the rapid generation of new content. Additional content is designed in a "modular" format, which can easily be "plugged in" to any Singularity campaign with minimal effort.

Second, the system places equal focus on personal, vehicular, and starship combat. As a result, combat at or across any of these scales is quick and easy to run.

Thus far, three plug-in modules have been released for the game:

Additionally, one setting sourcebook has been released for the system, detailing the Systems Malfunction universe. This sourcbook also includes a selection of Biotech's augs, Mind Games' psionic talents, and a brand new plug-in module for Aetherial Magic.