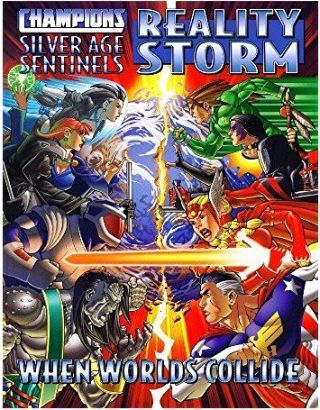 Reality Storm: When Worlds Collide is a Superhero Crisis Crossover, unusual in that instead of involving comic book companies it crossed over two Tabletop RPG games: Silver Age Sentinels and Champions.

Produced in 2004, the game sourcebook includes both a playable adventure as well as a section with rules for converting characters from one game system to the other.

The adventure involves two Anthropomorphic Personifications: Entropus, the Guardian of the Multiverse, and The Trickster, the embodiment of Chaos. (Note: both are Champions characters.) The latter manages to trick the former into leaving his base of operations, the Crystal Palace, and then lures the greatest villains of two Earths- SAS' Kreutzritter and Champions' Doctor Destroyer- into it. The villains agree to work together (temporarily) to use the place in order to cause a "reality storm" that threatens both worlds, and demand their total surrender. In addition they banish The Champions and the Guard beyond the timestream, leaving it to the players' characters to rescue the heroes, defeat the villains and save the worlds.

Tropes in Reality Storm include: