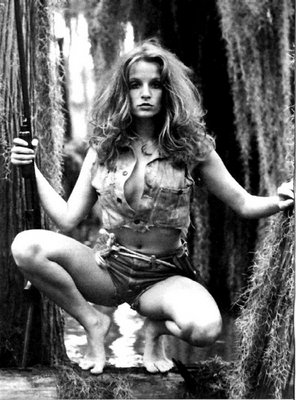 A 1974 exploitation film starring Playboy Playmate Claudia Jennings. The story follows a gorgeous Louisiana poacher named Desiree as she runs from the local sheriff, his inept deputy son, the mean and nasty patriarch of the Bracken family, and his two dumb-as-mud hillbilly kin after being framed for murder. The movie was sold on the idea of seeing Jennings run around in cutoffs but there's a number of squirm inducing scenes of attempted rape. A sequel was made in 1988 called Gator Bait: Cajun Justice, with 100% less Claudia Jennings and 300% more hairspray