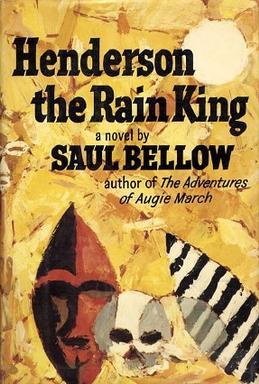 I want, I want, I want
Henderson the Rain King is a 1959 American existentialist novel written by Saul Bellow that tells the story of 55-year old Eugene Henderson traveling to Africa in search of something that can appease him of his boredom from being so wealthy and "happily" married.

The book is written as if Henderson is the author because of the first-person narrative. He first gives out deeply personal details about himself (he’s 6’4”, weighs 230 pounds, a huge nose and mustache) and that he went on a trip to Africa to find some relief from his boredom with being happily married to a wife who never complains, a personal net worth of $3 million (worth approx. $26 million today) courtesy of his famous scholar father and having had lots of children. His trip to Africa proceeds to give him even more to ponder about the nature and complexity of human behavior and cultures.

Arriving at Africa, he is greeted by a poverty and famine-stricken village that celebrates his physical victory over a semi-friendly battle with their king Itelo but after he accidentally destroys their water cistern, he leaves out of guilt (there's a good chance he was going to get kicked out anyways). He is then greeted by a slightly more resources-rich village that rejoices over his supposed extraordinary strength and choose to make him the “Rain King”, which he realizes he does not want to become.

Saul Bellow states this is his favorite book that he's written. When the book was first published it received divided reviews from critics but today is acclaimed.