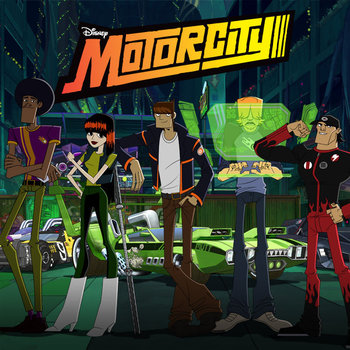 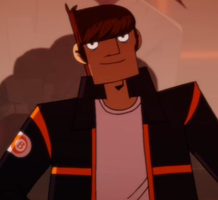 The hero of the series. Mike used to live and work in Deluxe as Kane's top cadet, but when he saw what kind of man Kane really was, he quit and fled to Motorcity. Now, as leader of the Burners, he fights Kane with everything he has.

Julie is the Burners' inside woman. Posing as an intern at KaneCo to gain information, her connections to Deluxe run deeper than that—unbeknownst to all but a select few, she's Kane's daughter. This causes much internal conflict, as she fights for the Burners' cause but also loves her father, and hates to see the monstrous things he does.

Julie: If I don't try to help Motorcity, I'm no different from him.
Chuck 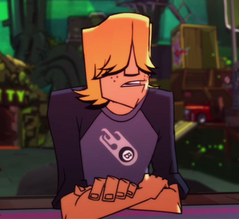 Chuck is Mike's closest friend, almost always at his side. He generally rides shotgun alongside Mike, and is a computer hacker and technical expert. He's also terrified of almost everything the Burners do. Despite this, he's risked his neck for his friends more than once, and it's clear peaceful days without Kane would be his fondest desire. He also roleplays on weekends and has an unrequited crush on Claire.

Dutch Gordy is the Burners' mechanical expert. Alongside ROTH, he patches up the Burners' cars and other equipment. Dutch is also a talented artist, particularly with graffiti. He left Deluxe when he was persecuted for making art, leaving behind his mother, father, and younger brother Dar. 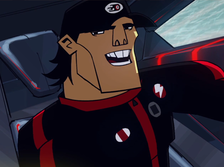 Texas is the coolest, strongest, most awesome guy you'll ever meet—according to himself. Definitely strong, but very out there, Texas acts as the muscle of the Burners, as well as comic relief. He loves action movies and has a vivid imagination, and sometimes even his craziest fantasies have helped the Burners out—or, at the very least, grounded them in reality.

Jacob is the Burners' mentor and owner of their garage and main hangout. Years ago, he was Kane's partner, and helped create much of the technology in Detroit Deluxe. It's unclear when Jacob learned of Kane's megalomania, but it drove him down to Motorcity, where he now serves as a voice of wisdom and experience for the Burners. 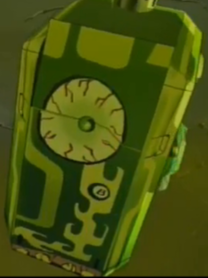 R.O.T.H. is a repair drone and sidekick to the Burners who was reprogrammed from one of Kane's robots. While cowardly, he's loyal and hardworking, and often helps Dutch with modifying the Burners' cars. 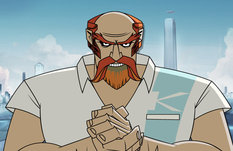 The head honcho of Detroit Deluxe, and primary adversary of Mike and the Burners. Kane runs Deluxe with an iron fist, outlawing any sort of personal freedom in the name of safety and security. He does, however, have one person he truly cares about, his daughter Julie.

Kane's rather daft right hand man. Tooley has the temperament and intelligence of a guard dog—loyal to Kane no matter what, but dumb as a post. He has an unrequited crush on Julie. 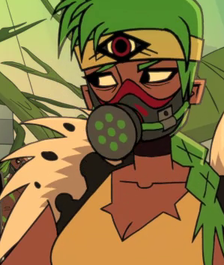 The "queen" of the Terras, a group of Motorcity residents who lived agrarian lifestyles before their land was contaminated by Kane's toxic waste dumps. As an added result their bodies were heavily mutated, and they won't stop until all of Deluxe is gone, innocent civilians included.

The Duke of Detroit

The Duke of Detroit 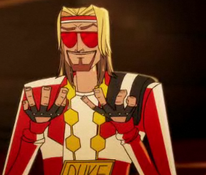 An uber rich, uber hammy overlord from Motorcity. The Duke is on no side but his own, and loves being the center of attention, which often brings him into conflict with Mike and the Burners. He can't stand anyone being more popular than he is and will go to terrifying lengths to ensure he takes the number 1 spot. 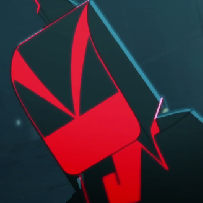 A mysterious character with a grudge against Mike. Red hates KaneCo, but he hates Mike even more. 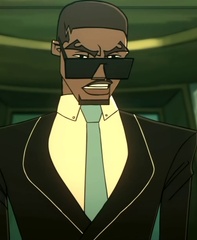 A regular client of the Burners and the leader of the Skylarks gang, who run a motel in Motorcity.

The Duke's robot minion, first appearing in "The Duke of Detroit Presents." Blames Mike Chilton for a nuclear blast to his face (when it was actually the Duke that commanded Dan to do that to himself in the first place) and swears revenge.

A teenage girl who lives as a Cabler with her father. Like Dutch, she's an engineer and an artist who designed the Cablers' settlement houses, and the two quickly strike up a bond.

Tennie's dad, who fears for her safety and leads the Cabler settlement. 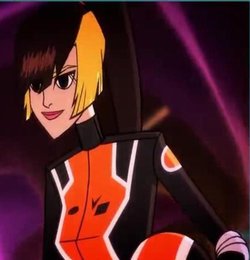 The rather ruthless but charismatic leader of the Amazons gang.

Leader of the Mama's Boys, and a Jerkass to top them all. 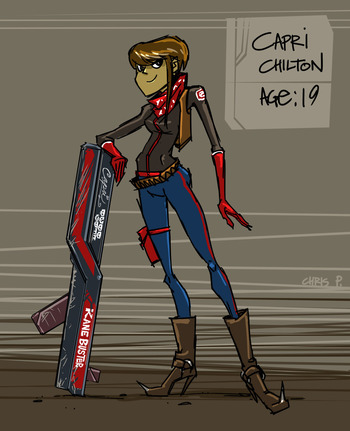 Image from the People of Motorcity

Mike's older sister that he doesn't know about, as revealed by a drawing creator Chris Prynoski made, shared by the Tumblr blog People of Motorcity. In season 2, she would have been living in the badlands outside Detroit. Based on that info (and that she's not wearing the mandatory Detroit Deluxe uniform), she's listed as a Motorcity resident on this page. 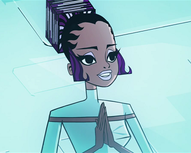 Julie's friend from Detroit Deluxe, and so far the only one aware of Julie's double life. Claire is a girly girl, and while she cares for Julie, she's not too pleased with the Motorcitizens... at first. Chuck has an unrequited crush on her.

Dutch's parents and younger brother Dar, whom he left behind on slightly uncomfortable terms in Deluxe before leaving for Motorcity.
Jenzen

A fellow Cadet from Mike's KaneCo days. He only appears in the flashbacks in "Vendetta," so not much is known about him, but his connection to Mike and the ambiguous possibility that he is Red's true identity has grabbed fan attention.