Characters of the TV show and Videogame Nightmare Ned.

The main character of both the Nightmare Ned video game and TV show. He is a bald, bespectacled, 10-year-old boy with a hyperactive imagination, using it to deal with his fears, troubles, and anxieties through dark and quirky nightmares. He lives with his mother, his father, and baby sister. He also has a grandfather named Ted Needlemeyer, but he has only appeared in the video game. 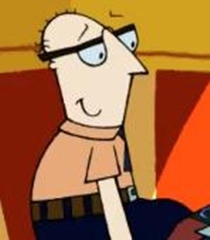 Voiced by Brad Garrett in the TV series

Although he tries to comprehend Ned's nightmare dilemmas, it does not occurs often, as he is constantly confused by them. In the video game, he is only a supporting character and does not speak a single line during the game's course, but plays a bigger role in the TV series. 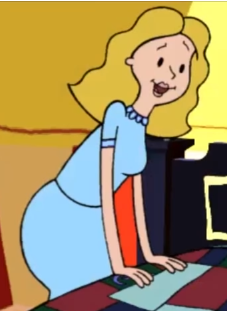 Sensitive and caring, she seems to understand Ned more than his father.

Voiced by Kath Soucie in the TV series

Mr. and Mrs. Needlemeyer’s daughter and Ned’s baby sister. She only makes a cameo appearance in the game and plays a very minute role in the show. She is almost always seen in her mothers arms.
Advertisement:
Others

"Time to bury all your [twirls scythe] troubles, Ned!"
Voiced by Harry Anderson

◊ this won't hurt a bit!"
Voiced by Alexandra Wentworth

Attic, Basement, and Beyond Shadow Creature/Sally

"Sorry, but this spot is taken."

Attic, Basement and Beyond clan

The "Amazing Twins!" (aka Petey and Repetey)