Megatokyo has come a long way from its Two Gamers on a Couch beginnings, accumulating a lot of characters in the process.

A nice, sweet yet repressed and self-criticizing artist/gamer geek who came to Japan because of what Largo did at E3. Out of money, he helped out some unknown girl in a train station. Things just snowballed from there. 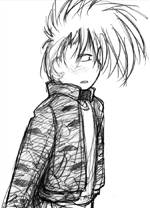 Largo is. Oh, you want more? He started off as an overenthusiastic FPS-playing gamer geek, but developed (some say flanderized) into a l33t-speaking action guy.

A former idol and occasional booth babe who works at Megagamers.

Erika's sweet, unconfident roommate, a waitress and wannabe idol who, through a combination of luck, the internet, a feverishly-awaited game and a radio interview, garnered a legion of obsessive fans who would do anything for her. She's also Piro's Love Interest.

A mysterious teenage goth girl who appears after Largo has one of his adventures. It eventually becomes clear that the weirdness around her is not due just to Largo's skewed perceptions. She's prone to fainting spells and suddenly disappearing, and, despite many scenes in cafes and restaurants, has only once been shown eating. 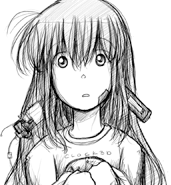 A prototype of the Emotional Doll System (EDS), a PS2 app that uses a Robot Girl for Dating Sim games, Ping was left with Piro and Largo by Tsubasa, her original owner, after he left for America. As you might expect, she's somewhat naive, but has a good heart and is very enthusiastic.

A fifteen-year-old student who first met Piro at a manga bookstore, during which she accidentally became the owner of his sketchbook. After a good deal of drama, the sketchbook gets returned- and Yuki's life proceeds to take a turn for the weirder, not the least because of her developing status as a Magical Girl.

One of the students in the Great Teacher Largo's English class along with Ping and Miho. She's not too pleased with the eccentric man nor the craziness that he brings. While full of snark and having a couple secrets of her own, she has shown a more caring side.

Seraphim is a field agent for the Conscience Enforcement Authority and Piro's "conscience". She routinely appears to Piro as a small angel-winged woman perhaps six inches (15 cm) tall with (apparently) correspondingly reduced weight and ability to make virtually everyone overlook her presence.

Asmodeus is the only conscience entity introduced into the story so far who is not a member of the Conscience Enforcement Agency. He is apparently the evil side of Piro's conscience, although he seems to generally view his suggested deeds as "having fun", rather than "doing evil."

Boo is a hamster who is currently employed as a temp agent by the Conscience Enforcement Agency. He was assigned to help ease Seraphim's caseload after she complained about how severely overworked she was. Soon after, he was given a role as Largo's conscience, which has been his primary mission ever since.

Dom is an American who works for Sega's black ops division. When he hired in, the job opportunities were tight, with only one slot available for a new employee.

Ed is a Sony Enforcement Division agent, Dom's best friend and rival. They both applied for a job with Sega Japan after graduation. Dom locked Ed in the trunk of his car so he would miss the job interview.

In General
A clan of powerful kitsune living in and around the Tokyo area.
Komugiko "Mugi" Sawatari

A one-tailed kitsune and part-time bouncer at the Cave Of Evil, and a very old friend of Miho's. Looked after Pirogeth (Piro's character) in Endgames when he stopped playing. She’s a high school Biology teacher

who specialized in the study of the Poacae plant family, specifically wheat and barley. note Komugi = wheat, ko = girl

Megumi Sawatari
A co-worker of Kimiko's at Anna Miller's and an aspiring voice actress. She is also a cousin to Komugiko and the two of them tend to bicker constantly when they are together. Unlike most of the Sawataris, she doesn't have any visible kitsune traits.

Yakugashi Sawatari
Komugiko's daughter and a two-tailed kitsune. A teenage manga artist, she was originally embarrassed about her kitsune heritage, leading her to hide her tails and ears, but has since decided to wear them openly.

Great-Grandma Sawatari
Komugiko's grandmother and Yakugashi's great-grandmother. An eight-tailed, extremely powerful kitsune, she leads the Sawatari clan. Shows up in a two-comic miniseries showing her interactions with Mugi and Yakugashi and giving a bit more background on the Sawataris.

Ashe Sawatari
One of Megumi's cousins. A one-tailed kitsune who works with Megumi's grandmother running a love hotel.

Megumi's Grandmother
Megumi's currently-unnamed grandmother. A member of the "northern clan" of the Sawataris. She runs a love hotel in Tokyo, much to Megumi's embarrassment.

A Ninja who first showed up as the challenger to Largo for a Mortal Combat Visa, Junpei now seeks to assist the 'l33t-master' and learn from him.

One of Yuki's classmates, and as of late her love interest. Evidently nursed a crush on her for many years which she has only recently become aware of.

Yuki's mother, and a mysterious woman who knows more about what's going on than she should.

Yuki's father, and head of the Tokyo Police Cataclysm Division.

Tsubasa
A Japanese friend of Piro's. Piro and Largo crash at his apartment after they lose all their money. An extremely hard-core otaku, he was Ping's original owner. His departure forces Piro & Largo to move into Megagamers, getting the plot going in earnest.

Ninja Grandmaster
A petite, female ninja that comes across Miho when Junpei brought her to the ninja compound to keep her safe. Unbeknownst to all, she is actually the clan's grandmaster.