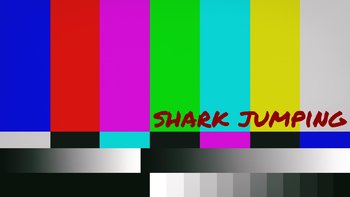 "There comes a time when life gets you down when Ratings are low. You've got to do what it takes, got to up the stakes, 'til there's nowhere left to go!"
Advertisement:

Shark Jumping is a web series created by married couple Beth Elderkin and Tim Sampson in which they look at hit TV shows we know and love to figure out where, exactly, they jumped the shark. To begin with, they have to analyze the show to figure out why people liked it in the first place, as well as to precisely chart their decline and the elements that started running them Off the Rails. They've also covered made-for-TV movies, and in summer 2016 they ran a series called Once a Pilot where they cover TV shows that either only lasted one episode or whose pilots never even got picked up. They have also produced a recap vlog for Once Upon a Time and a gaming-focused podcast called Easy Mode Go.

In 2017, Shark Jumping went on a months-long hiatus that ultimately ended with Beth and Tim deciding to halt production on the show, citing time constraints and a desire to focus on their personal careers. The entirety of the show used to be found on YouTube, but all of the videos have since been set to private.

Tim and Beth are also both well known as journalists independent of the show: Tim is currently a writer for The Onion and Beth is currently the weekend editor for io9 and a contributing reporter for The Daily Dot.

Tim and Beth have reviewed and analyzed the following shows and movies:

I'm Tim! And I'm Beth. And today, we're looking at these tropes!