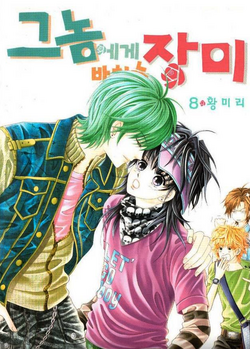 He's Dedicated to Roses is an eleven-volume manhwa by Mi-Ri Hwang, also the author of Cutie Boy and Hot Blooded Woman.
Advertisement:

I-Da Choi has life pretty rough, being forced since a young age to be a slave to the daughter of her parent's boss, Mi-Mi. So in order to relieve stress, she dresses up as a boy, Yo-Dah, and goes around calling up gangs so she can beat the shit out of them. Along the way, she makes two friends, Ju-Nah and Shi-Nah, neither of whom mind him keeping his background secret, especially since they've got a few secrets of their own. Then one day, she gets kissed by a complete stranger as I-Da in order to fool said stranger's clingy girlfriend. When she later pays the stranger back, as Yo-Dah, he mistakes her for his dead little brother, Mi-Ru. The next day he starts showing up at her school looking for Choi Yo-Dah, and so a complicated drama commences.