Literature / Jake And The Dynamo 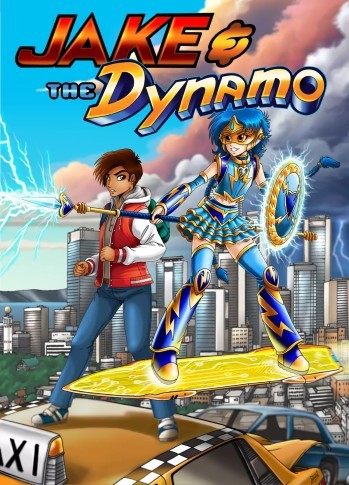 Jake and the Dynamo is a Magical Girl novel series by DGD Davidson. Originally released episodically as a Web Serial Novel, it was eventually published in e-book form. The first novel in the series, The Wattage of Justice, was published by Superversive Press in 2018.

In the far future, remnants of mankind inhabit the city of Urbanopolis, under constant assault by the forces of evil and darkness, represented by the Dark Queen's kaiju army and many other nefarious foes. The city only survives thanks to the benevolent Moon Princess, who had ascended into heaven with the promise to someday return. But the city is not defenseless, as the Moon Princess gave it protectors in the form of magical girls; every so often, a girl is born with exquisite powers to use for protecting Urbanopolis from the relentless monster attacks.

Fourteen-year-old Jake Blatowski doesn't really care about magical girls much, though, and is more excited about his upcoming graduation to high school. Unfortunately, a computer glitch causes him to get moved back to fifth grade, and that's not the end of Jake's troubles. By sheer coincidence, Jake discovers that his new classmate Dana Volt is actually the famed Magical Girl Pretty Dynamo, and he finds himself involved in her battles against the rampaging monsters... and now everyone is convinced he is her new boyfriend. Unfortunately, so is the nefarious Dark Queen, who seeks to take down Pretty Dynamo by targeting her loved ones.

Jake Blatowski really isn't going to have a fun time.