May contains spoilers for those who have only watched the anime.

The Protagonist of KZ, Aya is a relatively ordinary schoolgirl who is anxious about anything surrounding her.

Of course she has reason to worry how life will unfold before her. She's a victim of Middle Child Syndrome. Her academic profile has been extremely lopsided—being very strong in Japanese and plainly dismal in math—which is a problem in Asia. And on top of all this, she doesn't have any friends at school because she can't follow their small talk.

Right after having her admiration on the KZ Soccer Team skewered on a Crash-Into Hello, she was assigned to the Special Class in Shumei Seminar because of her lopsided grades—and sees the same KZ boys she crashed into moments before. And that's the first time she made friends, some pretty extraordinary ones...

The Leader and founder of "KZ Detective Team" and the genius striker on the KZ Soccer Team. Like the archetypal shonen hero, on one hand he is confident, proactive and energetic, but on the other hand—as Aya has experienced first-hand—he is also a rude, pretentious and bad-tempered attention-grabber. Still he does have a soft side, especially towards his acquaintances.

A Tall, Dark, and Handsome charmer, Kuroki is The Social Expert of the Detective Team, which allows him to act as the maintain an intelligence network across the town while maintaining the team's mental well-being.

The group's math genius, Uesugi acts as the cold, logical analyst for the team, as well as the local Deadpan Snarker.

Known for his Encyclopaedic Knowledge in social and natural sciences, Kozuka is the most approachable member of the detective team. He's the only member of the KZ Detective Team that isn't in the KZ Soccer Team. During investigations, he plays the role of the forensic scientist.

The pretty New Transfer Student to Aya's class in The Moth Fly Knows, who eventually joins both the soccer team in Shumei and KZ Detective Team.

Shinobu Nanaki
First introduced in The Youkai Computer Knows, he starts off as a boy who was paid for Shumei Seminar... but never attends. When Aya attempts to visit him on her teacher's request, she absolutely couldn't believe her eyes...

The boy who sits next to Aya when she starts middle school. Despite being seen as a delinquent by both her mother and KZ Detective Team, after standing out against the rest of the class' ignorance towards her, she see him as a Nice Guy. Declares himself at the end of The Egg Hamburger Steak Knows as Aya's "fifth friend" before leaving her as a consequent of the case's resolution. After that he appears twice in The Valentine Knows and The Red Mask Knows before comes back to Aya's class in ''The Tanabata-hime Knows''. 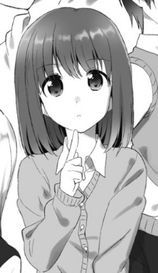 Aya's innocent and ditzy little sister. She's in the second grade in KZ, and moved on to the fifth grade in G spinoff, where she became the protagonist.

Tatsuki Hikage
The Leader of the Genie Team G, he is also a baseball player. He's a year older than Nako.
Mei Miori
Rin Wakaouji