Webcomic / Get Your War On 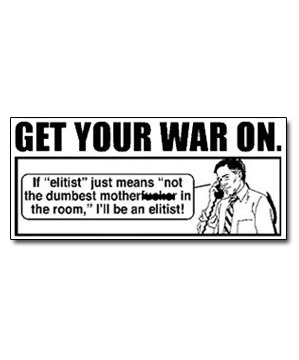 A panel from one of the strips, with added Censor Box.
Advertisement:

An incomprehensibly bitter, angry, profane, surreal and hilarious political Web Comic by David Rees, composed entirely of clip-art and with the general emphasis being on the bubble text, which tends to come out as something like an Author Filibuster. It actually started under the title "Crumbly Comics" and chiefly dealt with the vagaries of corporate life/office work. These early, mostly apolitical strips are collected in the book My New Filing Technique is Unstoppable, a phrase which also gives Rees' site its URL, http://mnftiu.cc

. The comic covered events from shortly after 9/11 to just after the end of the George W. Bush presidency, generally reflecting Rees' appalled and incensed reaction to much of the doings of the United States in this period, with the characters (such as they are - nobody is ever named) frequently expressing incredulity and generally acting as if they are trapped in their own personal hell. To say the series wore its bias on its sleeve would be a significant understatement.

, whose target is corporate attempts to censor and/or control the internet.