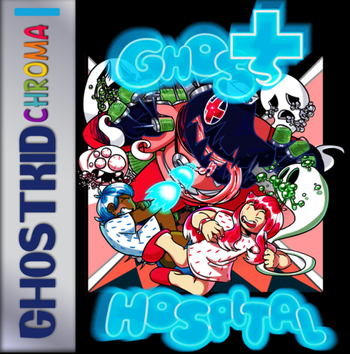 A game about anxiety, depression, despair, mental rock bottoms, and, of course, ghosts.
My goodness, you're right, you really are alive, aren't you?
— Dr. Poe

Ghost Hospital is a GBC-styled Role-Playing Game developed by Lev Lefton. The first demo was released on April 7, 2017, and the current version of the demo is available via GameJolt

You play as Robin, a young girl who one day finds herself waking up in Purgatory Ridge, a hospital for ghosts — despite being perfectly alive and well, as her assigned ghost doctor, Dr. Poe, soon finds out. She then starts to seek her way out of the hospital and find her way back home, and along the way, she meets and partners up with a ghost boy named Jay, and the mysterious Sarcastic Ghost, who help her fight corrupted ghosts as well as her own paralyzing anxiety and depression.

The game's official development blog can be found here