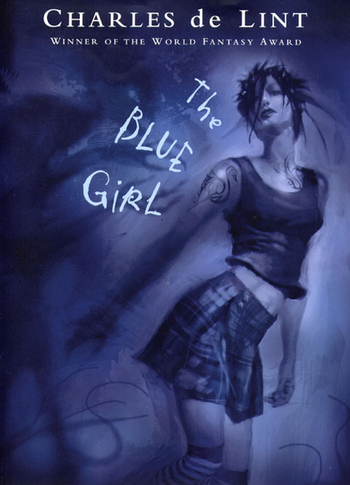 "It's funny. Tonight's the first time in a long while that I'm not nervous about going to bed. I'm actually looking forward to that weird music and seeing Pelly. No. I'm counting on seeing him. But as soon as I start to drift off, the shadows pull loose from the corners of my room, and I jerk awake."
—Imogene
Advertisement:

The Blue Girl is a novel written by Charles de Lint released on October 25, 2004. It follows the character of Imogene along with her Shrinking Violet best friend, a Ghost Boy Stalker with a Crush who is trying to show Imogene his fairy friends. Unfortunately this draws the attention of Eldritch Abominations.