The Contractually Obligated Chaos cast members have a whole lot of tropes associated with them as well as with the stories. Be warned that there are spoilers here...

Beetlejuice/BJ Beetleman
The self-proclaimed "Ghost With the Most," Beetlejuice is a powerful spirit of chaos who happened to become rather deeply entangled with a mortal girl. He often masquerades as "BJ," Lydia's human boyfriend (later husband) and the son of Mr. Beetlemannote the human persona he sometimes used in the cartoon.

Lydia Deetz
As a child, Lydia unexpectedly befriended the trickster ghost Beetlejuice, and over the next several years formed a bond that became virtually unbreakable. By the time she reached adulthood, it became something more than friendship, although even they didn't realize just how serious it was.
Prince Vince
Prince of the Neitherworld, he once had a crush on Lydia. Now they've settled into much more comfortable roles. He's one of the biggest supporters of Lydia and Beetlejuice's relationship and is an avid Tumblr member.
Donny Juice
Beetlejuice's nice, polite, and friendly brother. His full name is Dobsonfly Juice, but everyone calls him "Donny." His cheerful demeanor might get on Beetlejuice's nerves, but Donny does his best to support his brother and adores Lydia.
Mr. Monitor
The executive director of the Neitherworld Network television studio, Mr. Monitor values nothing so much as high ratings - so the more Beetlejuice and Lydia get into trouble, the happier he is because the Neitherworld denizens are absolutely glued to their sets.

Original Characters, by order of appearance 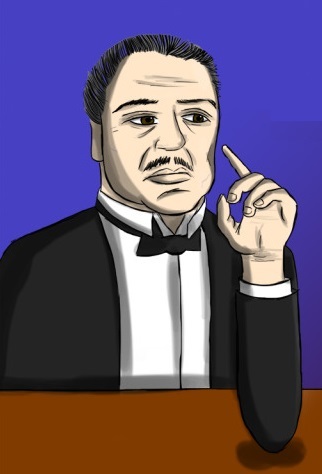 Art by Lais Above

, used with permission
The Neitherworld's Fairy Godfather bears a strong resemblance to Marlon Brando. He grants wishes and keeps secrets, but very little happens without his knowledge and he's far more entrenched in the happenings of the world than anyone might guess.
Hugo
An awkward man in his mid-twenties, Hugo is the apprentice and adopted son of a New Orleans mystic. When he meets BJ and Lydia in The Bug Princess, he recruits them to assist him with a protective ritual for the city. Naturally, the plot interrupts.
Erebos
Hugo's ritual unwittingly allows Erebos, a Shadow Man, to enter New Orleans. He immediately begins to try to amass power for himself.
Lady Delphine
Hugo's teacher and surrogate mother, Lady Delphine is called upon to help the heroes restore the status quo after Hugo's ritual goes badly awry.

Vasile
A Romanian strigoi mort, or vampire ghost, Vasile in life was a nobleman with a castle in the Carpathian mountains. He was murdered there, and for centuries he worked to drag his castle into the Neitherworld. He can pass into the Outerworld in search of prey, but he's restricted by firm boundaries; however, if he can fulfill certain requirements for seven years, he'll be free to go anywhere and feed on anyone.
Lord Milo and Lady Anahita
Prince Vince's younger cousins, the children of his uncle Duke Luke. They appear during Bug Princess and the Seven Months as guests at his anniversary ball.
Lilura
The eldest of Prince Vince's cousins, daughter of his aunt Marquise Louise, and his heiress presumptive should he vacate the throne. Like the twins, she's first encountered at his anniversary ball.