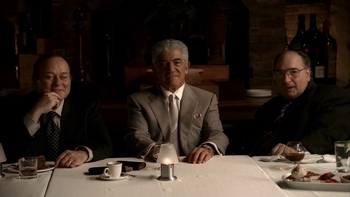 Vito Jr. has taken up with the Goth subculture, and is acting out of control, in order to cope with being bullied at school over his father having been publicly outed as gay. He gets busted vandalizing a headstone in a cemetery. Marie pleads with Tony for $100,000 to start over in Maine. Tony fobs her off with a promise to think about, and promises to have Phil talk to the boy.

Nancy Sinatra performs at a private party celebrating Phil becoming the Boss of New York. Tony speaks to Phil about Vito Jr., asking him to pick up the tab for the proposed relocation to Maine. Phil is less than sympathetic, but promises to speak to the boy. Phil does have that talk with Vito Jr., but doesn't offer anything besides insensitive advice about the need to step up and live up to his older ideas of being a man. Tony takes his turn, but he's just as callous and insensitive.

Tony meanwhile continues to lose numerous sports bets, very often in situations where he would have walked away with lots of money had he known to quit while he was ahead. The one bet he does win, which is based on a secret that the other team's quarterback has a hairline fracture, brings in little since he didn't demand enough of Carmela's windfall from selling the spec house. He and Carmela get into a massive argument over both the bet itself, and past issues.

Tony meanwhile struggles to make good his $200,000 debt to Hesh. They appear pleasant with each other on the surface, but reveal their true colors in each other's absences. Hesh resents Tony being late and pretending to forget to his partner, Renata. Tony in turn complains about Hesh to Dr. Melfi. Dr. Melfi in turn makes it clear to Tony that he needs to show up for appointments consistently in order for their therapeutic relationship to continue.

Tony continues to jerk Hesh's chain with Greedy Jew jokes, while Hesh continues to simmer in anger. Tony and Bobby show up to Hesh's, and invite him to a 'boat show'. Hesh senses the danger, and declines. Tony gives Hesh his $3,000 vig, which only serves to strain relations between them even further. Tony is angry in the car on the way home, and he yells at Carlo for not bringing in as much through construction as Vito had. He also offends Carlo by suggesting he should take up homosexuality to be more like Vito.

Vito Jr., while being bullied yet some more, deliberately defecates in the shower room as a way of lashing out. He gets expelled from his school. Tony commits to providing the $100,000 so that Marie and Vito Jr. can move to Maine to start over. The other mobsters voice their approval. But Tony decides to bet the whole $100,000 on another football game, and he loses all of it. He offers $18,000 to Marie to send Vito Jr. to a camp school where corporal punishment is permitted. Marie is far from enthusiastic about it, but resigns herself to it for lack of alternatives. Tony notices Ahmed and Muhammad speaking to fellow Muslims dressed in more traditional garb after he ends his call.

Employees of the camp wake Vito Jr. in the middle of the night, and drag him away against his will. Marie and Francesca are left crying their eyes out.

Renata dies of a stroke in bed, leaving Hesh devastated. Tony visits him to pay back the $200,000, and offer condolences. But Hesh is distant and shut off. Tony leaves with a scowl on his face. Their friendship is effectively over.