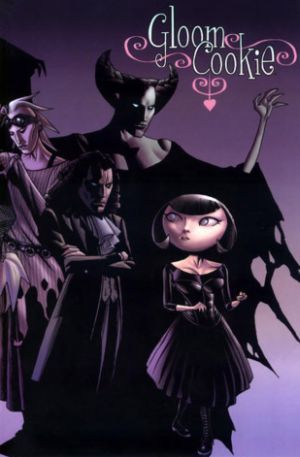 Gloomcookie is a goth comic. By Serena Valentino, it functions as both a satire of goth subculture and a supernatural fantasy story. The main character is Lex, a Perky Goth who works at a novelty shop and partakes in a lot of the goth subculture. She finds out that she's star crossed lovers with Damion, a boy with a secret as to his origin. Other characters are Sebastian, a lonely Reality Warper and Max, Lex's on-and-off-again boyfriend.

The series had 28 issues published, and a one-shot Christmas Special. Artist that have worked on the series are Ted Naifeh, John Gebbia, Breehn Burns, Harley Sparx, and Vincent Batignole.

Wait, the page ends here?! That is so Oogie!