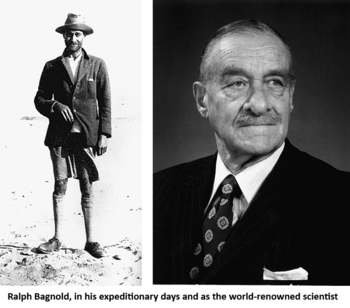 Ralph Bagnold OBE (1896-1990) was one of a number of incredibly cinematic adventurers in the mid-twentieth century who could claim to have taken the rule that Reality Is Unrealistic Serial Escalation. In fact it is arguable that many fictional writers would be to embarrassed to actually write his Real Life exploits into their works.

Bagnold was born in Devonport, England. His father, Arthur, was an Old Soldier with the Royal Engineers. His sister, Enid was the writer of National Velvet. During World War I, Bagnold enlisted in his father's regiment and served for several years in France, winning a number of honors. After this he went to Cambridge to study engineering before doing a number of years military service, policing The British Empire. Then began the most interesting part of his life.

Reading about the mysterious Lost Oasis of Zeezura in the Libyan desert, Bagnold set off on a number of expeditions. He and his companions formed the Zeezura Club which included such colorful characters as the mysterious and aristocratic, Hungarian Count Laszlo Almasy and the ferociously religious Orde Wingate, making up a Badass Crew. Zeezura was never found but what was discovered was navigational methods in the desert and means of driving and maintaining motor vehicles in a desert environment.

When World War II broke out the Zeezura Club was split apart. Almasy, being a Hungarian took the Axis side and became a commando and spy, having a number of interesting exploits; the secret rescue of several Jewish refugees is credited to him. In the meantime Bagnold and his companions formed the Long Range Desert Group. This was a number of light vehicles that carried out recon, raiding, and similar operations in the desert; motorized light cavalry if you will. The confusion they sowed in the Italian army helped bring about the Allies first major land victory in the war. The LRDG continued to cover themselves with glory through the entire desert war. And while they no longer exist, their memory is a part of Britain's special operations tradition.

But besides being a warrior and an adventurer, Bagnold was a scientist. He did immense study of desert terrain and of the behavior of sands. He experimented with sands by testing them with a wind tunnel and taking notes of the behavior of grains of various size as well as cataloging the different types of dunes. His book, The Physics of Blown Sands and Desert Dunes is a classic that has not been made obsolete and it is used by NASA for the study of Mars to this day.