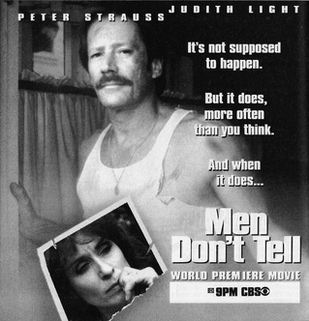 Men Don't Tell is a 1993 television drama film starring Peter Strauss and Judith Light. It was directed by Harry Winer. The film first aired on the CBS network on March 14, 1993, though it was never rebroadcast on over-the-air television, reportedly because it incurred the wrath of several women's groups. However, the film has since been shown a number of times on Lifetime.

Ed MacAffrey, a loving husband and father, is terrorized by the violent behavior of his wife, Laura. He tolerates this not only because he loves her and is concerned over the welfare of his daughter, but also because men are traditionally regarded as weaklings if they allow themselves to be battered by their wives. After one of Laura's destructive tantrums brings the attention of the police, Ed is suspected of being the aggressor. Finally, Laura goes too far and Ed tries to defend himself - whereupon Laura crashes through the front window of her home and is rendered comatose. Ed is arrested for domestic violence and attempted murder.

As he is interrogated, he tells his story of years of abuse, and how he even once sought help by calling a domestic violence hotline, only to get scorned and hung up on. This interrogation takes all night, by highly skeptical police. While this is going on, his children have been taken to their paternal grandfather Jack, a retired police officer, to spend the night. In the morning, his young daughter Cindy, who chose to remain silent through the years of abuse due to the humiliation and shame, asked Jack if her mother was in trouble. This surprised Jack, who then asked her why she thought her mother, whom he thought was the victim of his abusive son, would be in trouble? To this, Cindy said, "For being so mean to Daddy all the time, and yelling, and breaking things, and hitting us and stuff". When this is brought to the attention of the police, Ed is finally let go while Laura is arrested.