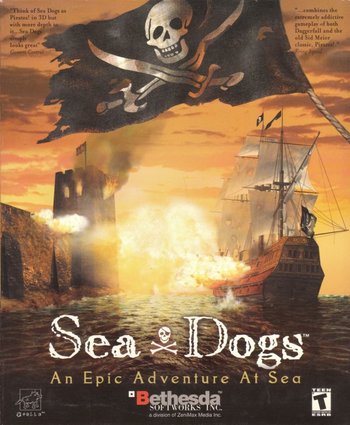 Sea Dogs is a Wide-Open Sandbox Action RPG released for PC in 2000 by developer Akella and publishers Bethesda Softworks, Ubisoft, and 1C Company. It is set during the early 17th century, in a fictional archipelago in the Caribbean Sea.

You play as Nicolas Sharp, a captain who is searching for his Disappeared Dad. The gameplay is non-linear, and the player will find themselves working with—or against—the major factions operating in the archipelago: the Kingdom of England, the Kingdom of France, and the Spanish Empire. Most of the gameplay revolves around sailing ships, managing their crews, bartering supplies between ports, and engaging in naval warfare against other ships.

The game has received a number of sequels over the years:

All of these games except for Pirates of the Caribbean are available for digital purchase on GOG and/or Steam, under the original Sea Dogs title. There is also a very large modding community that has supported the game with everything from unofficial sequels to total conversions, as described below under Game Mod.

Tropes Present in Sea Dogs and its sequels