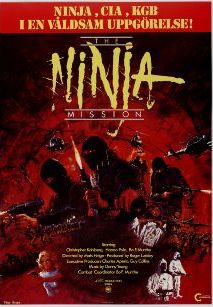 "Agents of destruction. Warriors of darkness. Professionals of death."

The Ninja Mission is a 1984 Swedish action movie directed by Mats Helge Olsson (who is pretty much Sweden's answer to Roger Corman).

The plot is as bare-bones as it gets. A Russian scientist named Markov is planning to defect to the west. However, the "CIA" team, sent to help smuggle him over to Sweden, turns out to be Soviet agents in disguise. Now it's up to CIA agent Mason and his highly trained group of Ninjas to infiltrate the Soviet mountain base and bring Markov to safety, once and for all.

These aren't your usual Ninjas, though. Although they got the stealth and the black jumpsuits, they are just as comfortable with submachine guns and hand grenades as they are with shurikens and swords. They are much more akin to a military special forces team than supernatural martial arts warriors.

To this date, The Ninja Mission is the Swedish movie which has been the most economically successful overseas, ever. (Suck it, Bergman!)

The Ninja Mission provides examples of: