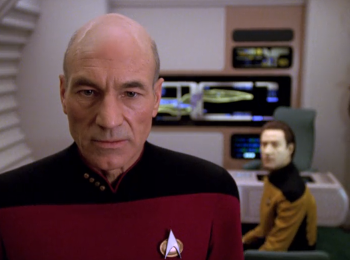 What is Data hiding?
The Enterprise is between assignments, allowing the crew some extra leisure time as they perform some routine exploration. Picard has invited Guinan to enjoy a Dixon Hill story with him on the holodeck, but just as the mystery is starting to unfold, Data calls in to report a scientific curiosity. Sensors have detected a T-Tauri type star within a stellar cloud that appears to have an Class-M planet in orbit, capable of supporting life.

As they are approaching the system, they detect an energy distortion resembling an unstable wormhole—not unusual near a T-Tauri star. Before they have a chance to withdraw, they are pulled in, and Data turns around to find that everyone has been rendered unconscious.

When they recover, Data reports that the wormhole stunned the crew for about half a minute. No major injuries or damage are reported. Thankful for their good fortune, they decide to play it safe and launch a probe to investigate the anomalous planet. Its telemetry shows it to be a mundane gas giant instead of the Class-M they expected, which Data speculates might have actually been from another system, detected through the unstable wormhole. Though puzzling, Picard decides it is not a mystery worth pursuing.

However, yet another mystery emerges. Dr. Crusher comes to Picard with some alien moss samples that she had planted right before the incident. They have inexplicably grown a full day's worth, which neither of them can explain. When they ask Data for his opinion, he offers a Technobabble hypothesis based on a temporal theory with little relation to botany. It's clear that the senior staff is not buying it, and after Picard dismisses Data on an errand, La Forge admits his astonishment that Data would offer such a far-fetched explanation.

With Data's state of mind in question, the crew investigates further without his knowledge. They uncover further evidence that a full day passed after the wormhole incident, and that Data falsified all of the computer's evidence to the contrary, along with the probe's record of the gas giant (actually a charted planet elsewhere in the galaxy). Further, it seems they may not have been lying about unconscious the whole time, as Worf's wrist was broken and subsequently healed. Data admits to nothing when confronted, but also has nothing to offer in his defense. Apart from his reticence, Data has cooperated fully, which leads the crew to conclude that he is not acting maliciously, and may have been forced into silence for their own protection.

Picard: [The clues] would seem to suggest that we were awake and aware for that day. Possibly in a struggle for our lives.
Crusher: The fact that we're still alive suggests we might have won.
Picard: Not necessarily, Doctor. Data's behavior would seem to suggest that we did not. Why else would he be willing to sacrifice his career rather than tell the truth?
Worf: If we didn't win and we didn't lose...
Picard: Then the only alternative would be a stalemate.

Though he recognizes the danger in further curiosity, Picard is not willing to drop the matter without clearing Data of suspicion. They return to the T-Tauri star system, where they find the original Class-M planet. Data implores Picard to leave, but to no avail. Troi enters the bridge, possessed by an alien, after which Data finally breaks his silence.

The inhabitants of the planet are a race of extreme isolationists called the Paxans. The wormhole was actually a defense system designed to stun the crew of curious vessels so that they can be relocated farther away under the guise of being caught by a dangerous anomaly. But as Data was not affected by this technology, he was able to resist them, leading to a confrontation. The aliens don't want their existence made known, but destroying the Enterprise might cause Starfleet to come looking.

Using Troi to communicate by proxy, the Paxans agreed to a compromise: the ship would be allowed to leave as long as the crew's memory and computer logs were wiped and Data was sworn to secrecy. The crew tried to remove all evidence of the event, but the loose ends they overlooked were enough to unravel the conspiracy. Now that the ruse has failed, the Paxans again consider violence, but Picard convinces them to give the plan another try.

Picard: The plan failed because clues were left behind that suggested a mystery, and to many humans a mystery is irresistible. [...] Consider the first time a run-through, a rehearsal to shake out the flaws. The second time will succeed if we leave no clues.
Paxan: You are a most unusual species. Worthy of a second chance. Proceed.

Armed with the knowledge of what went wrong the first time, the crew's self-imposed cover-up succeeds on the second attempt. There are no lingering suspicions, and after noting the system as hazardous for the star charts, the Enterprise continues on its way.