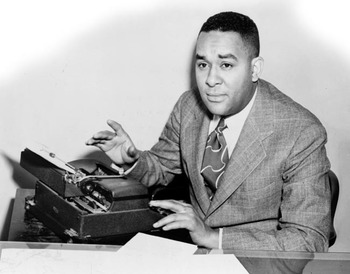 "At the age of twelve, before I had had one full year of formal schooling, I had a conception of life that no experience would ever erase, a predilection for what was real that no argument could ever gainsay, a sense of the world that was mine and mine alone, a notion as to what life meant that no education could ever alter, a conviction that the meaning of living came only when one was struggling to wring a meaning out of meaningless suffering."
Advertisement:

Richard Nathaniel Wright (September 4, 1908 – November 28, 1960) was a highly influential American author and poet. Born in Mississippi at the turn of the century, he lived a difficult life in which he saw the horrors of racism firsthand. Dropping out of school in 9th grade due to his frustration with the racist administration, he vigorously educated himself through novels and other literary works. A desire to escape the Jim Crow South caused him to settle in Chicago at the tender age of 17, where he hoped to start a career as a writer. There, he became involved with left-wing politics and began what would become a long and troubled relationship with the Communist Party.

Wright's first real success came with a collection of novellas called Uncle Tom's Children, which he based on his experiences with Jim Crow and racial violence in the South. Despite the book's dark tone and rather brutal imagery, the book was highly acclaimed, and the proceeds from the book were enough for Wright to move to Harlem, the "Mecca of the New Negro." It was here that he befriended fellow Black author Ralph Ellison, with whom he became Heterosexual Life-Partners. It was also where that he would write the novel that would become his most famous and momentous: Native Son. Native Son, a protest novel depicting the psychological effect of white supremacy on a young Black man, was an instant classic, thrusting Wright into international fame and recognition and making him one of the richest and most successful Black writers of his age. The book would eventually inspire Black Power movements in America — the Black Panthers even made it required reading — as well as national liberation struggles in Africa: no lesser personages than Frantz Fanon and Kwame Nkrumah drew inspiration from the book. Wright later penned another bestseller in the form of his Biography à Clef, Black Boy.

The major themes of Wright's works are American race relations filtered through the lens of his personal experience, the psychology of oppression, and his own disillusionment with Communism. The graphic violence and sexuality depicted in his works oftentimes finds him on ban lists in schools and libraries.

Not to be confused with Richard William "Rick" Wright of Pink Floyd fame.