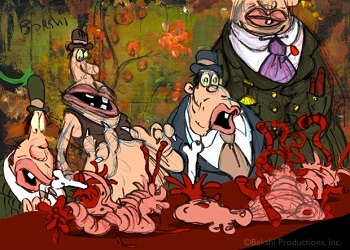 "Its a series of films I've always wanted to do—films about us, who were are, what we are, even if it hurts. Its a series of shorts, that tries to push the boundaries of 2D animation. Last Days is about us."
—Ralph Bakshi, in the video promoting the films kickstarter campaign.
Advertisement:

The Last Days Of Coney Island is a series of animated shortsnote which was compiled into a 20 minute film directed by animation legend Ralph Bakshi.

After doing the cult classic animated series Spicy City, veteran animator and director Ralph Bakshi left the animation field. Since then, he has been considered as an inspiration to animators and his colleagues. Out of the blue he had a massive impact from people when his films (such as Fritz the Cat, The Lord of the Rings, and Wizards) got reintroduced for people to see. It then led Ralph to come out of retirement to create another animated feature; The Last Days Of Coney Island.

After being rejected by various animation studios (such as DreamWorks Animation and Pixar) Ralph decided to do the film independently. In 2008, he stated that “something was wrong with the whole fucking thing” and put the project on hold, where it remained in Development Hell for a while. In early 2013, Bakshi started a Kickstarter campaign to obtain funding for the film. On March 2 of that year, it reached its goal. It wrapped up animation work in mid 2015, finished post-production work on October 2, and it was released on Vimeo on the 29th - just in time for Bakshi's 77th birthday. A year later he released the film onto his Youtube channel as well. See it here!