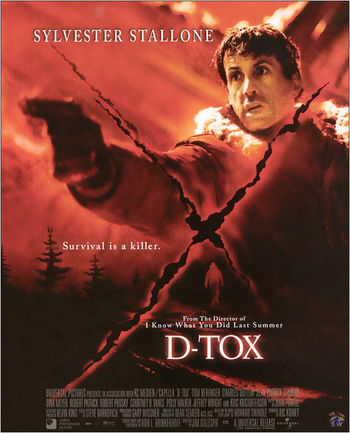 D-Tox is a 2002 American psychological thriller film directed by Jim Gillespie, and starring Sylvester Stallone, Tom Berenger, Courtney B. Vance, Polly Walker, Stephen Lang, Kris Kristofferson, Robert Patrick, Jeffrey Wright, and Charles S. Dutton. The film is based on the 1999 novel Jitter Joint written by Howard Swindle, released internationally by United International Pictures. It was given a limited release in the United States under the title Eye See You by DEJ Productions.

FBI agent Jake Malloy is pursuing a serial killer who specializes in killing police officers. While Malloy is out, the murderer calls Malloy from Malloy's home while Mary, his girlfriend, is there. The killer tells Malloy that he pursued him four years before for a series of prostitute murders; he is holding a grudge and he's going to kill Mary. Malloy rushes home to find Mary dead. When the killer's hideout is found, Seattle police and the FBI blockade the area before Malloy arrives. Malloy pursues the killer only to find that he appears to have committed suicide.

Three months later, Malloy descends into alcoholism over Mary's murder. After Malloy slits his wrists in an unsuccessful suicide attempt, his best friend and supervising officer enrolls Malloy in a rehabilitation program designed for law enforcement officers, established in an abandoned military base by Dr. John "Doc" Mitchell, a former cop and recovering alcoholic, as a way of dealing with his problems.

Malloy meets several other officers who are patients in the clinic, including Peter Noah, an arrogant and paranoid ex-SWAT officer, Frank Slater, a cynical, opinionated British police officer, Willie Jones, a religious homicide detective, Jaworski, an alcoholic narcotics cop who attempted suicide, Lopez, a foul-mouthed LAPD officer, and McKenzie, an elderly member of the Royal Canadian Mounted Police who saw his partner get killed. He meets several staff members, including Doc's assistant and mechanic Hank and compassionate resident psychiatrist and nurse Jenny Munroe, with whom Malloy develops a bond.

A blizzard seals everyone in the rehab center with no outside communication. When patients start turning up dead, Malloy must jump into the action again, and confront a shadow of his past.