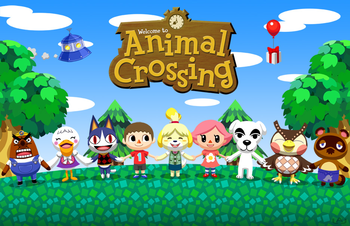 Population: growing!note Pictured from left: Mr. Resetti, Pelly, Rover, Male Villager, Isabelle, Female Villager, K.K. Slider, Blathers, Tom Nook
"Yeah, living on your own, being free. It feels great. But living by yourself can be a real drag, too. Still, if you've got some really tight friends somewhere nearby, then you know it'll all work out."
— K.K. Slider
Advertisement:

Originally released in Spring of 2001 for the Nintendo 64 as Dōbutsu no Mori (lit. "Animal Forest") in Japanese, most English-speaking players are probably familiar with the GameCube version, Dōbutsu no Mori+, which was released in America in 2002 as Animal Crossing.

Animal Crossing is a simple but entertaining "life sim" game that takes place in a small town in the country. The game's player characters are the only humans in a town populated by eccentric Funny Animals. There are pelicans working at the post office, a pair of hedgehog sisters who run the tailor shop, a verbose owl who runs the museum but is terrified out of his mind by bugs, and a fox who acts as a shady traveling merchant. Your other, less permanent neighbors are likewise an eclectic assortment of other species, from dogs to cats, elephants to octopuses, and over thirty other species, with each of them having one of eight (six prior to New Leaf) varied personalities.

In order to pay off the debt on your house to the local shopkeeper/real estate agent (a tanuki named Tom Nook), you'll have to scrounge up things to sell for the local currency, Bells. You can hunt insects, catch fish, gather fruit, dumpster-dive for old furniture, or sell the stuff you earn running errands for your neighbors. You can also put some of your hard-earned money towards buying new clothes, or furniture for your home. Keep in mind though, the game progresses in real-time, according to your system clock: Your animal neighbors are either awake or asleep at certain times, and shops open and close on a set schedule. Most bugs and fish can only be caught at certain times of the year, and various events have time limits. While you can try to reset your game for better results, it's not recommended, as a mole will get very angry at you for doing it.

The game received several sequels, starting with Animal Crossing: Wild World for the Nintendo DS. It added a few new features such as the ability to get haircuts, hats and accessories to wear, new items to collect, the ability to communicate with friends over Wi-Fi (though the servers for it have since shut down), and a limited increase in interaction with your neighbors. City Folk, released for Wii, adds in the ability to visit the city, where most of the temporary shops that appeared in prior games (like Gracie and Crazy Redd) have taken up permanent residence. The game also allowed you to visit other people's towns and play with them online through Nintendo Wi-Fi Connection before the service was shut down. Animal Crossing: New Leaf for the 3DS has the first character you create become mayor of the town, and adds the option to upload your town to Nintendo's servers, allowing other players to visit even if you're not online. Animal Crossing: New Horizons for Nintendo Switch was released on March 20, 2020, and brought back the ability to visit other players' habitats online.

An anime movie based on Wild World was released in Japan in 2006; there are currently no plans to show it elsewhere, but several fan translations exist.

The series is one of many represented in the Super Smash Bros.. Initially, Animal Crossing was only represented with a few Trophies in Melee, but in Brawl, they introduced a stage called Smashville along with more Trophies. Villager, a fighter based on the player characters of this series, was introduced in 3DS/Wii U, along with even more Trophies and a new stage in each version; the 3DS version had a stage based on Tortimer Island from New Leaf while the Wii U version had a stage called Town and City based on the premise of City Folk. They were followed closely by Isabelle, who was an Assist Trophy and Mii Gunner costume in 3DS/Wii U before getting Promoted to Playable in Ultimate, in addition to several Spirits, including ones based on characters from New Horizons in a Spirit event after that game was released.

The series has a minigame based on it in Nintendo Land called Animal Crossing: Sweet Day. It also made its way into Mario Kart 8, which features two Villagers and Isabelle as DLC characters, as well as a DLC track based on the series (all of which is included at launch in Mario Kart 8 Deluxe).

The series as a whole features examples of: