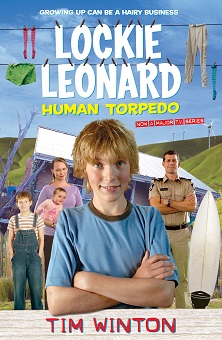 Growing up can be a hairy business.
Advertisement:

Lockie Leonard was produced by Goalpost Pictures Australia and is distributed by the Australian Children's Television Foundation. The theme song "Worlds Away" is performed by Jebediah.

Lockie Leonard premiered in the UK on Saturday 27 September 2008, as part of the long running children's Saturday morning programme TMi which airs from 09:00 to 10:30 on BBC Two. It ran for the first 12 episodes then continued to air on CBBC Channel. In America, it has aired on the short-lived Family Room HD.

Lockie Leonard is a surf rat who moves with his family to Angelus, a small coastal town in Western Australia. Lockie has to deal with starting high school in a new town with no friends and a house that is in danger of sinking into a swamp. After nutting himself in the surf on his first day in town, Lockie meets a head banger named Egg, and the two eventually become best friends. After attending his first day at a new school, Lockie manages to fall in love for the first time with Vicki Streeton, the smartest and richest girl in the entire school, whose father also happens to be the mayor of Angelus. The first series is spread over Lockie's first year spent in Angelus with his family.

The second series follows Lockie Leonard's second year in Angelus, middle of nowhere, where Lockie must cope with new situations. Vicki leaves to go to boarding school, and Lockie makes friends with new girl Mel, to whom he is initially assigned "buddy duty". His best friend Egg decides to make a new best friend in school bully, Curtis, and begins dating Vicki's friend Sasha. Lockie's brother Phillip enters Angelus High a year early owing to his impressive intelligence, and discovers a new friend or two along the way. Meanwhile, poetry-loving Sarge must deal with the new constable at the police station, and Joy decides to get out of the house and set up a new radio station, Radio Angelus.