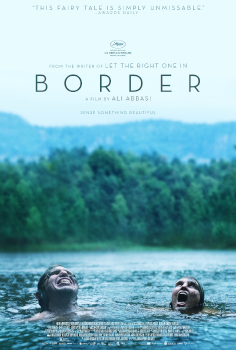 Border (Swedish: Gräns) is a 2018 Swedish fantasy film directed by Ali Abbasi based on a short story by John Ajvide Lindqvist.

Tina is a woman who works for the Swedish Customs, and her supernatural sense of smell allows her to detect suspicious people such as smugglers and pedophiles. She also looks quite weird (this film was nominated for Best Makeup and Hairstyling at the 91st Academy Awards) and is conscious that most people think she is ugly. One day she meets a man named Vore who looks similarly strange.

Not to be mistaken for the Bollywood movie of the same name.