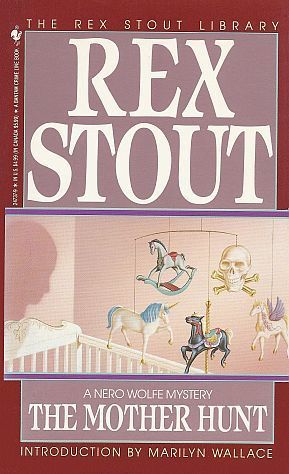 Lovely young widow Lucy Valdon arrives at the brownstone with an unusual request for Wolfe: a baby boy has been abandoned in her vestibule with a note claiming he was fathered by her late husband Richard Valdon, and Lucy wants to know if this is true or not, proposing Wolfe find the baby's mother to learn this. Archie tracks down the source of the horsehair buttons found on the baby's clothes, but Ellen Tenzer - the source in question - disappears from her Mahopac home before Archie can investigate her properly; Ellen is found strangled shortly afterward. Unable to investigate her, Wolfe compiles a list of women Richard knew from four of his associates and set Archie and the 'teers in motion. After weeks of investigation turn up no unaccounted-for newborns, Wolfe turns to Lon Cohen and the Gazette to coerce the mother from hiding. But this revelation also spurs the murderer into action as well and, with the police aware that Wolfe and Archie are withholding evidence, forces them to flee the brownstone.

A Nero Wolfe Mystery adapted the episode in its second season as Motherhunt, with direction credited to Alan Smithee.