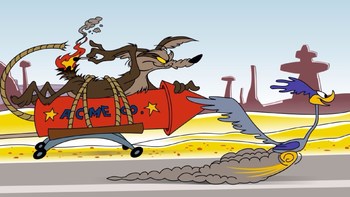 The eternal hunt continues...
"Hmmm-hmmm, it's time for me to eat.
Catching a pig is quite a feat!"
— The Big Bad Wolf, Richard Scarry's version of The Three Little Pigs
Advertisement:

A plot, frequently animated, which involves natural enemies chasing or hunting each other.

If it is any recurring, the antagonist will try several times to capture, kill, or otherwise defeat the protagonist, and keeps failing spectacularly, either because the target is too smart, or because the antagonist is just really unlucky. Often this plot will climax with a plan that looks actually serious, but will fail just as surely as the others.

The rare exceptions to the Failure Is the Only Option aspect may involve Negative Continuity. Frequently linked to Harmless Villain and Amusing Injuries, and may induce Rooting for the Empire if the antagonist is pathetic enough.