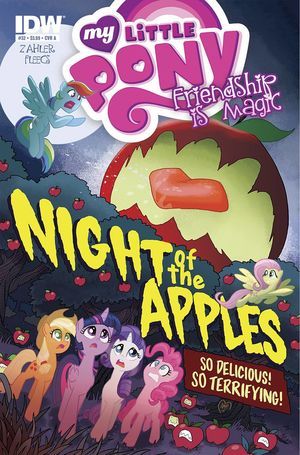 Time to make some applesauce.

Night of the Living Apples

Rogue meteorites created from the battle between Princess Celestia and Nightmare Moon a thousand years ago finally fall to Equestria, one crashing into Sweet Apple Acres. When Applejack goes to investigate, she is swarmed by hundreds of now-living apples created by the magic contained in the meteorite.

The next day, the rest of the Mane 6, Spike, Sweetie Belle, and Scootaloo go off to visit AJ. Unknown to the others, Spike is abducted by more of the apples. When they arrive at Sweet Apple Acres, they find that the entire Apple family has been enslaved by the apples, with the lead apple ordering the others to be captured before they can warn the rest of the town. Their numbers overwhelm the ponies, and the lead apple orders them to attack Ponyville. The town is quickly taken over, and Mayor Mare is forced to surrender the town, living under the strict rule of the apples as they prepare to spread out and take over other towns, including Canterlot.

The Mane 6 gather in secret to try to plot for information, but even with Fluttershy's animal friends helping to gather intel, they can't figure out how to stop the apples. They agree they need a spy inside the apple ranks, and Twilight uses a spell to turn Pinkie temporarily into an apple. Within the now secured Sweet Apple Acres, Pinkie finds Spike, kept caged up due to him being more dangerous than the ponies to the apples, as well as one Good Apple that would love to help the ponies to defeat the others. Pinkie returns and lets the others know of their ally.

However, they still would need to free the good apple and Spike, and that would be difficult with the number of apple troops. The idea of using the vampire fruit bats to attack the apples come up, but Fluttershy notes that the bats are all inside the sanctuary on Sweet Apple Acres, and even if she could get to them, she would have difficulty of communicating to them. This gives Twilight another idea, and with a bit of hyponotic-like suggestion, she is able to coerce Fluttershy to become Flutterbat once again, albeit with more control of her personality. However, as she is still unstable, they secure Flutterbat under the watchful eyes of the Cutie Mark Crusaders, and Twilight uses a spell to transform herself and the other Mane 6 into vampire bat ponies, with more control of their senses. They fly off and begin to fight against the apples, freeing Spike and Good Apple. They learn that while they might be able to get rid of the meteor, that will not stop the sentient apples.

While they are gone, Flutterbat, still struggling to keep control of her Fluttershy self, manages to break her bonds. As the other Mane 6 struggle against the mass of apples, Flutterbat arrives, having successfully contacted the vampire fruit bats, and they begin sucking the apples dry. With the tide turning against them, the lead apple has the others form a giant Spike-like monster to destroy Ponyville, arguing if they cannot have it, no one can. Twilight, Pinkie and Spike let the others tackle the monster while they seek out the meteor. Twilight senses the magic from Celestia and Luna's battle centuries ago, and uses some of it to super-charge Spike's fire breath, which he uses to power Pinkie's party cannon to launch the meteor into the depths of space.

Meanwhile, as the giant apple monster ravages Ponyville, Rainbow Dash manages to put on a burst of speed to crash through the monster, replacing the bad apple leader that powers the apples with Good Apple. Good Apple is able to convince the others to stop attacking, and the situation is quickly resolved. With Celestia and Luna's help, the apples are relocated to a remote part of Equestria to allow them to develop their own society hidden away from other beings. Good Apple insists that the bad apple leader come with them, and Celestia reflects that everyone can have a bad side but it is knowing how to overcome it that is what makes a pony a better being.