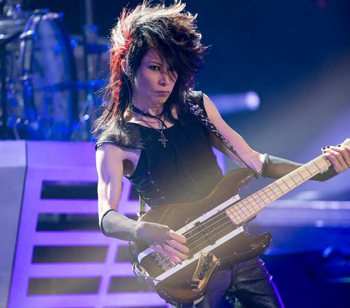 Hiroshi Morie, known by his stage name Heath, is best known for being the second bassist of X Japan, replacing Taiji in 1993, first playing in the "X Japan Returns" concerts (which, notably, were the first shows the band played as "X Japan" after the Frivolous Lawsuit over their name was decided). Created a Broken Base, is a common source of Flame War s, and became The Scrappy... even though he's by no means a bad bassist. Was actually discovered by late guitarist hide.

Went solo after X Japan disbanded for the first time in 1997, releasing a variety of solo works and working most notably in Dope Headz with Pata. Seems to be very close to Toshi and will often work with him in the restart of his solo career.