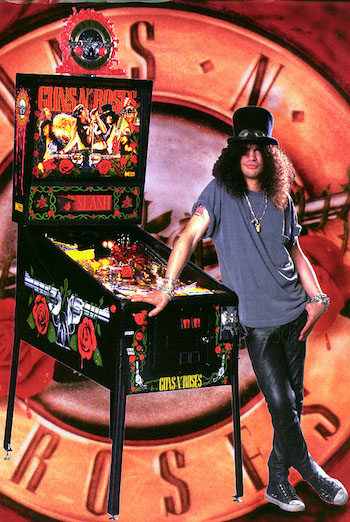 Not a Celebrity Endorsement.
"You know, there hasn't been a good rock 'n' roll machine in, like, 15 years... I thought, well, Guns is a well-enough known name that we could probably do one. So I started drawing out the game, then I started sketching, writing down the rules..."
—Slash, Rip magazine, January 1995

Guns N' Roses is a Licensed Pinball Table released in 1994 by Data East, one of only two widebody pins the company creatednote WWF Royal Rumble is the other and their only one with two plungers.

The objective of the game is to gather up the members of the world-famous band, get them rockin', and whip the crowd into a nonstop frenzy. Ride a motorcycle with Gilby Clarke, start multiball with Axl Rose, and bring in Matt Sorum to Score. Rock out with Dizzy Reed, grab a Jackpot with Duff McKagan, get all the band members on stage for Multiball, then cut into a wicked Slash Solo. When you've completed all of the Guitar Modes, start a Riot and play the table to build up the Jackpot. All of this is, of course, accompanied by nine of the band's songs, including the exclusive "Ain't Going Down" (an outtake from the ''Use Your Illusion''

The game was originally conceived by Slash, who approached Data East with his initial table design ideas. There, he was paired with music fan John Borg, programmer Lyman Sheats, and artist Markus Rothkranz, and the result is regarded as one of Data East's best tables ever. Pinball players enjoy its moderately complex ruleset, good variety of modes, and satisfying shots, while GnR fans get another way to cut loose with their favorite band.

The table was only a modest success, selling 3,000 units; as a result, the ones available today fetch high prices, sought after by both music fans and pinball collectors.