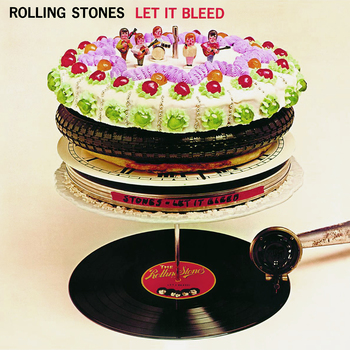 "... but if you try sometimes, you just might find you get what you need."
Advertisement:

Let It Bleed is the eighth studio album (tenth American album) by The Rolling Stones, released in November 1969 on Decca Records in most of the world and its subsidiary London Records in the US and Canada. It is the last Stones album to feature founding member Brian Jones, who was fired from the band and subsequently drowned during its recording, and the first to feature his replacement Mick Taylor. The band struggled to achieve the lush production sound on the singles "You Can't Always Get What You Want" and "Gimme Shelter", while pushing for a heavier, more bluesy sound in the studio. The release was thus delayed until the end of the year, after the Stones had completed their American tour; nevertheless, many critics view it as the ultimate swan song for the tumultuous era of The '60s.

With this record, the band continued to invoke explicitly sexual and political subjects such as The Vietnam War in "Gimme Shelter", unrequited love in "You Got the Silver" and "Love in Vain", and lust in "Let It Bleed" and "Live with Me". The album features influential Genre-Busting concerns such as the male and female choir in the final track, the creative use of Soprano and Gravel Vocal Tag Team, and the Alternative Country sound expressed throughout the record. Straddling these complexities with the perceived decadence of the time, the album is hailed as a stylistic and thematic masterpiece for expressing maturity and passion when confronted with grim reality.