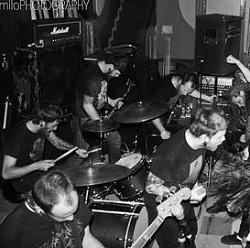 Fall of Efrafa were a post-metal/sludge band from Brighton, England, active from 2005 to 2009. They took their name from the totalitarian warren in Watership Down and references to the book are rife throughout their lyrics and artwork. Other recurring themes are atheism and animal rights.

Amongst their musical influences they count Neurosis, Godspeed You! Black Emperor, Agalloch, His Hero Is Gone, and Buried Inside.