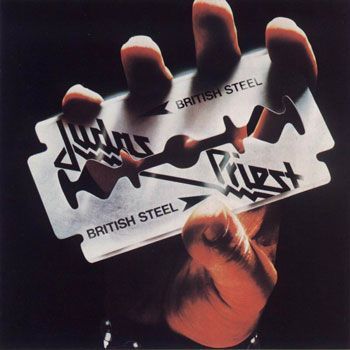 "All inside, it's so frustrating, as I drift from town to town / Feel as though nobody cares if I live or die / So I might as well begin to put some action in my life!"
Advertisement:

British Steel is the sixth studio album by Judas Priest, released in 1980. It is generally considered to be their breakthrough album, and is certainly the most popular outside the hardcore Priest fan-base. It includes fan favourites and hits such as "Breaking The Law", "Living After Midnight" and "You Don't Have To Be Old To Be Wise". The band are often called "Metal Gods" by fans, in reference to their song from this album. Even though said song was about giant robots, the title for many fans reflects the band's genre and how they are revered.

It is also their first album with drummer Dave Holland, who would turn out to be their first long-term drummer, lasting from 1979 to 1989.

An episode about the creative process behind this album was featured in the documentary TV series Classic Albums.